It took me a little while to get into Lonely, I’m Not, Paul Weitz’s new play currently running at Second Stage Theatre. Perhaps it was the Brechtian slates (as one fellow audience member described them during a post-show talk back) that not-so-delicately moved us from scene to scene. (Once I got used to them (projection design is by Aaron Rhyne), they were kind of cool, and eventually they seemed to blend perfectly into Mark Wendland’s scenic design.) Maybe it was the logistical task of keeping track of three actors playing 11 characters.

Or, perhaps it was simply that I’m kind of tired of seeing the same character portrayed on stage and film: Super successful (and often wealthy) guy in his early- to mid-thirties has too many toys, suffers a third-life crisis (he’s too old for a quarter-life crisis and too young for mid-life; I’m coining a new term) and needs the love of a good woman to see him through. Sound familiar?

In Lonely, I’m Not, which is carefully and skillfully directed by Trip Cullman (Assistance), the ill-equipped for life guy is Porter (Topher Grace, in his off-Broadway debut), and the woman is Heather (Olivia Thirlby). It’s not like there are huge storytelling or story arc problems in Weitz’s latest. (He was last represented on the Second Stage stage with Trust, in which his male lead was also in his mid-thirties and undergoing an existential crisis.) In fact, I happened to like the way the ending wasn’t too neat. And I found that the choice to have Heather be blind added a different dimension, both logistically and symbolically.

Still, can we retire the “Porter” stock character? 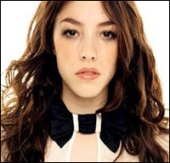 The dude-spinning-out-of-control trope aside, I was pleased with the natural dialogue. It was also interesting to note that Porter’s color palate changed throughout the show. (I won’t tell you what changed, but watch for it! (Costumes are by Emily Rebholz.)) Olivia Thirlby gave a full, nuanced performance, portraying a woman who feels she has much to prove. And Topher Grace was sensitive and layered as Porter. (Even though I didn’t love the character, I liked the performance.)

And in the end, I suppose what sets this play apart from others of its ilk is the theme running through the play, and hopefully into audiences’ minds: get out of your comfort zone and begin. It’s best summed up in this advice Heather gives to Porter: “You just have to find one thing and everything else will fall into place.” She (a blind woman) is talking about her approach to “learning” a room. But when Porter ends the play by cleaning an end table and saying, “I’ll start here,” we know it means much more.

For more information or to purchase tickets, visit 2ST.com.