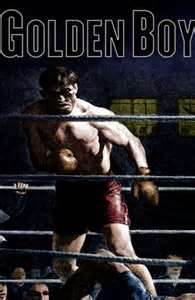 This Clifford Odets drama is a good, if melodramatic, story about a boy who must choose between his calling and his passion. Joe Bonaparte (Seth Numrich) is the titular boy. He’s a virtuoso on the violin but at rise he is convincing Tom Moody (Danny Mastrogiorgio), a boxing promoter, to let him in the boxing ring. While there, Moody’s secretary and girlfriend, Lorna Moon (Yvonne Strahovski) catches Joe’s eye and thus a love triangle is thrown into the mix. Joe pursues life as a pugilist, much to the dismay and chagrin of his Italian immigrant father, played with understated care by Tony Shalhoub.

In total, Golden Boy, directed by Bartlett Sher (Women onthe Verge of a Nervous Breakdown) and presented by Lincoln Center Theater, could stand to be trimmed down a bit. It is three acts, which, with two intermissions, brings the running time to nearly three hours. While sometimes three hours feels like nothing, as in Who’s Afraid of Virginia Woolf?, sometimes it feels like forever. (The fights in Virginia Woolf are much more poetic, engaging and visceral than any of the bouts – inside or outside the ring – in Golden Boy.) With a little trimming (maybe we 86 some of love triangle exposition) and swap in a more vibrant dame (with a better accent) causing so much discord I might have enjoyed this. As it was, it was a silver-level revival of this family drama, but not golden.
Broadway drama play