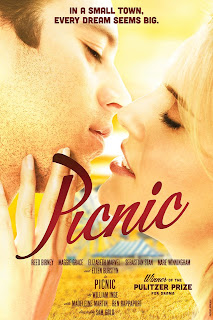 “What good is being pretty?” Madge wonders out loud in William Inge’s Pulitzer Prize-winning play Picnic. In Roundabout’s Sam Gold-directed revival, it seems that being pretty isn’t worth much.

Written in 1953, Picnic is set in the backyard shared by Mrs. Helen Potts (Ellen Burstyn), a lonely woman who is left to take care of her mother (whom we hear but never see) and Flo Owens (Mare Winningham), mother to the pretty Madge (Maggie Grace) and the smart (read: not nearly as beautiful as Madge) Millie (Madeleine Martin). Though 18-year-old Madge has been seeing the well-to-do Alan (Ben Rappaport) all summer, it’s Labor Day and when she sees the hunky Hal (Sebastian Stan) laboring in the yard, she questions her choices. Offering a foil is the Owens’s boarder, schoolteacher Rosemary (Elizabeth Marvel) and her beau, Howard (Reed Birney).

Essentially, Picnic is about lost souls trying to find their place in the world. In the younger generation, we see the possibilities of what could be. In the elder, we see reality set in. We see missed opportunities and regrets. We are presented with people at a crossroads, struggling to break free of the paths that have been set for them. Despite cautionary tales or advice from those who know better, we root for these people to live the lives they choose.

Marvel is a delight as the independent school teacher who was never the pretty one. (She is equally matched by Birney (Uncle Vanya), who is reliably good and a lovable scoundrel to boot.) Marvel’s Rosemary is both pathetic and hopeful, and it’s interesting to watch her reconcile her independent streak with her desire to play house.

Though she’s the pretty girl Rosemary never got to be, Madge is arguably in the same boat. I was surprised that while watching Madge’s journey, brought to life in an unexpectedly natural performance from Grace, I felt sympathy for the skinny, pretty blonde. It is often difficult for me to relate to or feel bad for the ingénue; I think, “oh, you’re beautiful so you’ll be fine in the end.” But when Madge’s mother expresses a similar sentiment, Madge rebels. She doesn’t want to just be fine—she wants to be fulfilled. These classic themes of discovering who you are and striking out into the world make it easy to see why Picnic debuted to such accolades and why it is still relevant today.

While the play itself is good, the production is a little hit or miss. Sam Gold’s direction is one of the reasons I wanted to see this production. When I saw the show in early previews, it seemed that Gold (The Aliens, Seminar) still had some work to do. His blocking throughout is inspired, subtly punctuating just the right moments and character traits. Yet the play lost steam toward the end. Madge and Hal’s final encounter felt terribly awkward (what with Hal’s overuse of the word “baby”), though that might have less to do with Gold’s direction and more to do with Maggie Grace and Sebastian Stan’s lack of chemistry.

Stan, by the way, was better than expected. He was recently seen in the USA miniseries Political Animals, opposite Sigourney Weaver and Burstyn. Stan was dull and one-note in the series but here he was both sensitive and full of braggadocio, offering a layered take on a beefcake. (Have your smelling salts handy—you might need them when Stan takes off his shirt.)

The supporting players were mostly fine. Madeleine Martin felt too broad for my taste, but Mare Winningham and Ben Rapparport settled nicely into their respective roles. The plucky Maddie Corman (so effective in Next Fall) brought some welcomed spunk to the show, and the great Ellen Burstyn was a hoot.

It’s always a treat when you get to see a classic play presented by some great talent. Funny and sometimes soapy, you’ll likely have a good time at this Picnic.