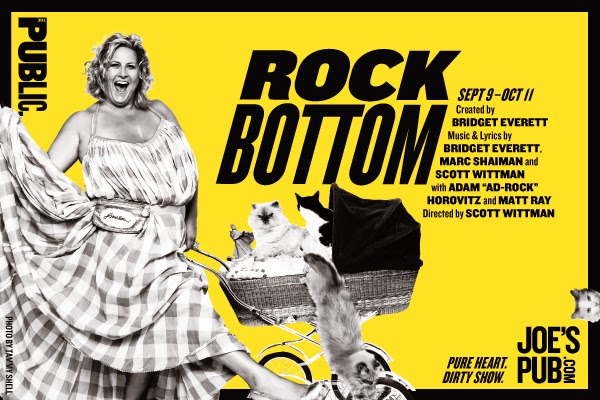 Raunchy, bawdy, salacious—a potent but dangerous combination that can turn awful quickly. Or they can form something exciting and honest and wildly + wonderfully outrageous. Fortunately for audiences, Rock Bottom follows the second path.

Bridget Everett's one woman show (she does have a live band and back up singers—all terrific) comes on like a freight train, and keeps going and going, with Everett leaving everything on the stage. Typically, I'm turned off by raunchy humor and such colorful and vivid language. Yet I was completely enthralled with Everett as she shared herself with us.

In trying to figure out why this night was different from all other nights, I have concluded that I was engaged because (1) I knew going in this wasn't going to be the kind of sweet cabaret I might expect from, say, Laura Osnes; and (2) Everett seems to come by her raunchiness and bold + brash sensibility honestly. Rather than seeming to employ vulgarities in order to shock the audience or simply for more attention, I get the sense that the Bridget we saw on stage is actually Bridget, and that authenticity made her act not just palatable but titillating.

To tell her story, which includes unwavering stances on Chardonnay, sexual proclivities and much more, Everett teams with a handful of writers: About half the songs are co-written by Marc Shaiman and Scott Wittman (Catch Me if You Can), who happened to be sitting near me and with their friends Anderson Cooper and Andy Cohen. A few songs are co-written with Matt Ray, and Beastie Boys' Ad-Rock (Adam Horovitz) gives an assist on the graphic, "Eat It."

It's not all over-the-top, though. In interludes and even a few of the songs, Everett allows herself to become vulnerable, wiping away the provocative theatrics that mask the complexity of her emotions. In a touching number, "Get Over You," Everett sings about the loss of her father. It's a poignant moment, and the switch from salacious to sincere and back again keeps you fully engaged at every moment.

Rock Bottom is definitely something you will not see on Broadway. As successful as seemingly subversive works like Hedwig and the Angry Inch are, the reality of Broadway keeps daring pieces like this downtown. And that's fine, because, fortunately, in New York, there are venues for art like Rock Bottom; the Public is meant to be for the people and of the people, and with Rock Bottom, the venerable institution stays true to its mission.