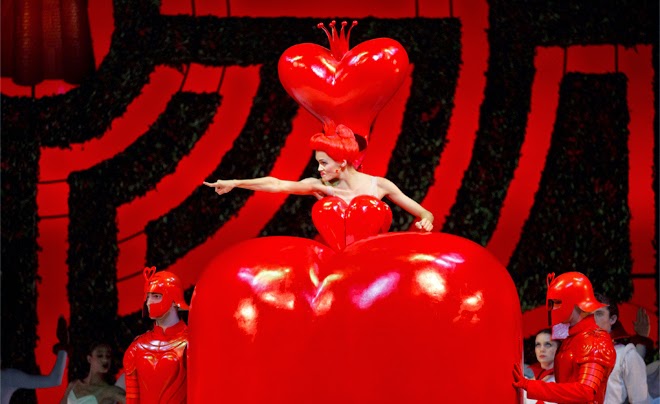 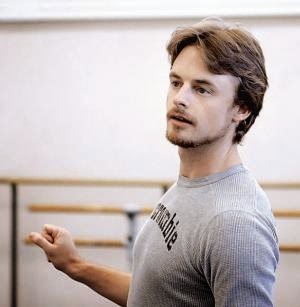 Like all his other narratives, in Christopher Wheeldon's Alice's Adventures in Wonderland, everything is told through dance. As in Wheeldon's Estancia, These characters don't miss an opportunity to dance a feeling (to Joby Talbot's score), making it a much more enjoyable and beautiful ballet.

Moreover, since these are Alice's adventures in Wonderland, and the creatures she encounters are wondrous, the music and choreographic styles can vary and go almost anywhere. So we have, for example, a Mad Hoofer and Caterajah (those would be a tap-dancing Mad Hatter and an Arabian nights-ish caterpillar). There's also a brief dalliance into a Sweeney Todd–like sausage factory that is definitely more grim than wonderful, but throughout the choreography and vision is unified, imaginative and a feast for the senses.

In particular, the garden scene that closes act two is visually stunning. After taking a bite of the mushroom given to her by the caterpillar, Alice finds herself in the beautiful garden of which she caught a glimpse earlier (when she first landed in Wonderland and was in the room with all the doors—you know, she drinks something and becomes tiny; she eats something and becomes a giant). The dancing garden looks like a watercolor come to life, and the romanticism complements Alice's pas de deux with Jack (who, in Wonderland, is the Knave of Hearts).

At this point, it's worth noting that the story, or scenario, as it's called in the program, by Nicholas Wright, deviates from Disney's animated feature, Alice in Wonderland. In the ballet, we begin with a garden party at Alice's home in Oxford in 1862. Her parents are hosting the party, and Lewis Carroll is there to entertain Alice and her two sisters. Jack is the family gardener's son, and he and Alice are sweet on each other.

Alice falls down the rabbit hole when Carroll takes a picture of her; in a flash (literally) she's falling farther and farther down the hole (effective projection design by Jon Driscoll and Gemma Carrington) until she lands in that room with the doors. (Costume and scenic designs are by Tony winner Bob Crowley (Once) and lighting design is by Tony winner Natasha Katz (The Glass Menagerie), both of whom are part of Wheeldon's creative team for An American in Paris.)

Like in The Wizard of Oz, people from Alice's real life show up in Wonderland. Her mother, who scolded Jack for bringing the wrong color rose, is the Queen of Hearts. Carroll is the White Rabbit. The magician who'd be showing off at the party is the Mad Hatter, and so on. Throughout, Alice seems to just be enjoying the adventure—going places in Wonderland she can't go in real life. (...And she's trying to reunite with Jack/The Knave, of course.)

It's a wonderful, thoroughly entertaining production that once again makes clear that Christopher Wheeldon (A Place for Us, Cinderella) is a consummate artist, and will make one fantastic director.

The Joyce Theater Foundation presented the National Ballet of Canada's production of Alice's Adventures in Wonderland. The National Ballet co-commissioned the piece with London's Royal Ballet, where Alice premiered in February 2011. Wonderland then bowed in Canada in June 2011. At the performance I attended in NYC, principal casting was as follows: