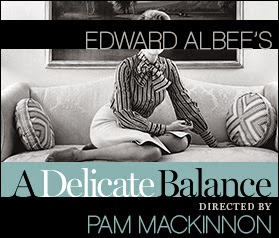 A starry revival of Edward Albee's A Delicate Balance is now on Broadway. The classic play features, as many Albee works do, smart people talking eloquently around relationships and their inherent issues.

The conversations all take place in the living room "of a large and well-appointed suburban house. Now," program notes state, and over the course of one weekend (Friday night to early Sunday morning, to be exact). The home (sumptuous scenic design by Santo Loquasto) belongs to Agnes (Glenn Close) and Tobias (John Lithgow). 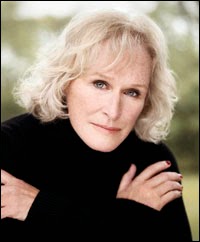 Agnes begins by theorizing about her demise, and whether or not one can know if s/he is crazy. It sets the stage for the many philosophical wars that will be waged, as Agnes's sister, Claire (Lindsay Duncan), a defiant drunk, stirs things up; Agnes and Tobias's daughter, Julia (Martha Plimpton), returns home, escaping another failing marriage; and old friends Harry and Edna (Bob Balaban and Clare Higgins) interpolate themselves into everything.

With Tony winner Pam MacKinnon once again directing Albee (she won her Tony Award for her direction of the flawless revival of Who's Afraid of Virginia Woolf?), and with a cast that would make any producer envious, I had high hopes for A Delicate Balance. Unfortunately, this production misses the mark. 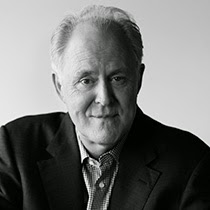 To be sure, there aren't any glaring errors, and some elements and performances are to be celebrated. (In particular, watch for Ann Roth's costume designs. Some characters blend into the set until, as the characters develop, they pop to life; some pop from the start.) In truth, though, the more the play wore on, the less engaged I felt because it seemed like I was watching one conversation on repeat.

I suppose you could argue that is somewhat the point. Agnes asserts that keeping something in shape doesn't mean making it into an ideal; rather, its about maintenance. It's about achieving that delicate balance to achieve some sort of stasis. Some, like Tobias, thrive on routine, on balance. So when a wrench gets thrown in and things shift, it can send you into a spiral. As each interloper makes his/her point, Tobias teeters on the fulcrum (that would be Agnes; a woman's work is never done). But the tension and stakes just aren't quite there. Every conversation feels like an intellectual exercise so when the tension passes its boiling point, the explosive fall out doesn't land emotionally, and you're left unbalanced.
A Delicate Balance Broadway Edward Albee Glenn Close John Lithgow Pam MacKinnon play revival