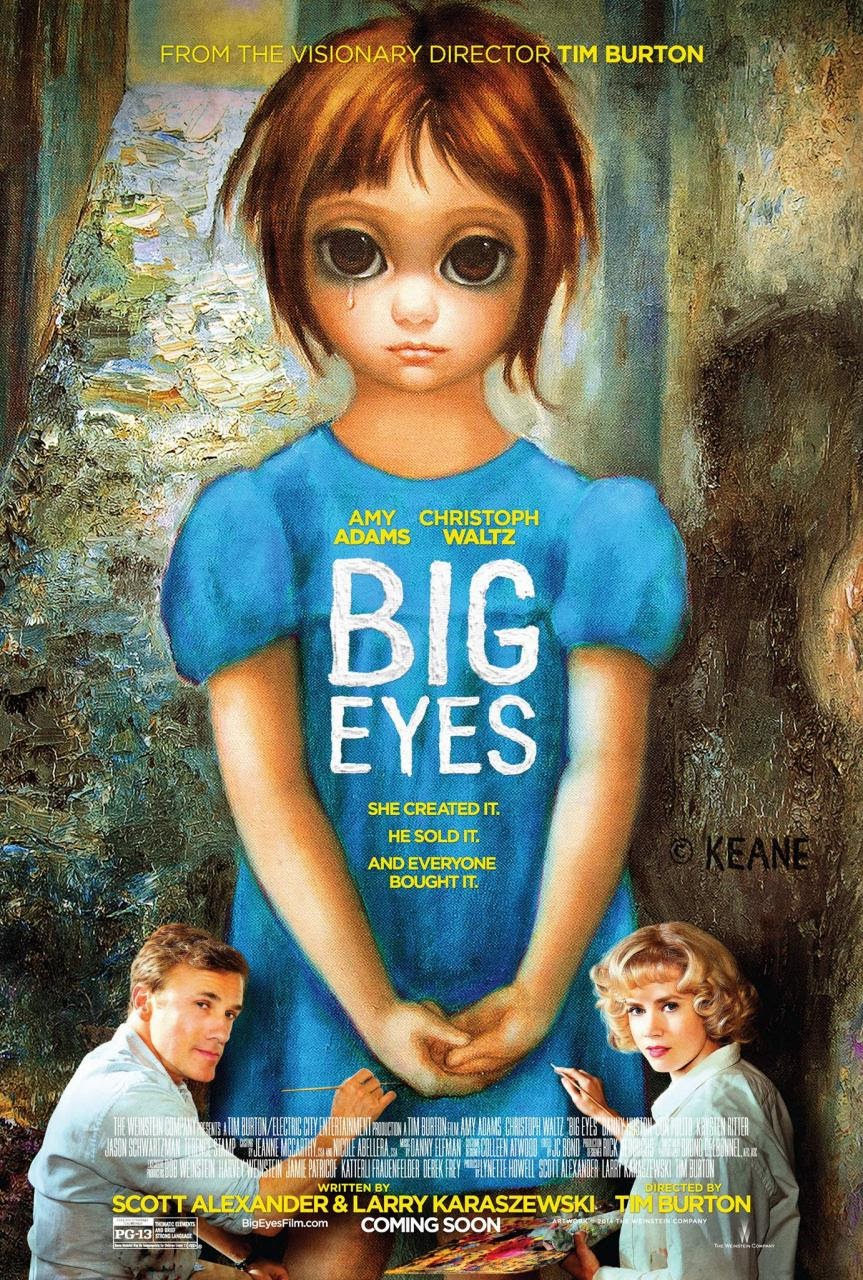 It's a great film, complete with a noticeable Tim Burton aesthetic. (I was particularly taken with the fuzzy look of the film, and the way every background, especially the scenic ones, looked like paintings.)

Big Eyes is interesting on many levels, one of which is seeing the birth of art as an industry. Walter Keane (Christoph Waltz) was a pioneer in making art affordable. He printed posters and post cards, enabling people without hundreds of dollars to buy the canvas version to have their own version of "mantle art," as Rothko might call it. It's rather savvy and actually an important contribution to the art world.

Making art more accessible, not in its style but its delivery, helps to keep it alive and helps to bring beauty to more peoples' lives. You know how I feel about art in my life, so naturally I'm impressed with the ground he broke.

But make no mistake: Walter is a huckster. Not the good-natured and ultimately harmless kind, like Harold Hill or PT Barnum. Rather, Walter is a huckster of the despicable, blood-sucking variety. From the moment he laid eyes on Margaret (Amy Adams), he knew he'd found his prey. He saw a mild-mannered, timid woman who was in a precarious position and pounced. He then proceeded to manipulate her, forcing her to, among other things, lie to her daughter.

Walter also deluded himself. We see this most clearly in the courtroom scene. He lies under oath, but he's so convinced himself that he painted the "big eyes" that he sincerely believes he's telling the truth, not that he's committing perjury. (The impish two-time Oscar winner Waltz (Django Unchained) is effectively unappealing.) But Margaret was complicit.

It's clear it takes a while for Margaret to get the courage to stand up for herself, and after being in and fleeing from a suffocating marriage (her first marriage), it's all too easy for her to fall back into the pattern of letting the man call the shots and dominate her. (I certainly don't mean to put the blame on Margaret. She was abused by Walter (not physically, but in just about every other way) and that's on him.)

Amy Adams (The Fighter, American Hustle) is fantastic. She plays Margaret as a quiet woman—literally, the sound of her voice is noticeably quiet, somewhat meek. Adams shows the evolution of Margaret, a genuinely nice person who wanted to provide for her daughter and to paint. There's a moment early on in the film during which Walter and Margaret are at a crossroads. Someone is admiring a big eyes painting and asks who painted it. Burton lets the camera linger on Adams, who is expertly portraying Margaret's inner struggle; you're rooting for her, wanting her to get there but Walter, the ultimate sleazy salesman, beats her to the punch. You see something break in Adams as Margaret realizes what just happened and what that means for the rest of her life.

I was also touched by the way Margaret's relationship with her daughter was portrayed. Margaret first committed to Walter to ensure a better life for her daughter, and that continued to be a driving force in the way she allowed Walter to control things. So toward the end of the film, when Margaret stands up for herself, and her daughter sees that—her daughter sees her mother being strong and doing what is just—it is quite poignant.

Though it's garnering award buzz and nominations for its stars, I feel like Big Eyes is being undersold. It's a truly touching portrait of one woman's struggle to assert herself. Attention must be paid.
Amy Adams Big Eyes Christoph Waltz film movie Tim Burton