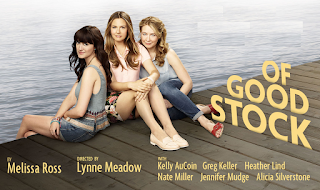 "It's like being at home," the couple next to me remarked after the lights came up for intermission. They were referring to the domestic tensions of the Stockton sisters and their beaus. Set in the Stockton family home in Cape Cod, Melissa Ross's Of Good Stock sees the three sisters, Jess (Jennifer Mudge), Amy (Alicia Silverstone) and Celia (Heather Lind), reuniting for Jess's 41st birthday. Jess and her husband, Fred (Kelly AuCoin), are hosting the gathering; Amy brings along her fiancé, Josh (Greg Keller), and Celia's new boyfriend, Hunter (Nate Miller), also joins the party. The Stockton sisters have unfinished business with one another, and with the legacy left by their now deceased parents. They struggle to come to grips with living up to the "stock" of their parents.

But it's not just a weekend of reckoning for the sisters. As Hunter (the most outsider of the outsiders) observes, families are complex. He offers that a family begins as one unit, and then each piece breaks off into other units and you have to work things out you thought you already worked out. There's the family you are born with; the family you choose; and the family you make. And so, we see that each couple, Jess and Fred, Amy and Josh, and Celia and Hunter, have to clarify, to use Jess's word, some things before they can move to the next chapter of their lives.

Of Good Stock is at times funny and at times poignant. The way those moods are divvied up is precise, and director Lynne Meadow's pacing is deliberate and effective, with comic relief giving way to sisterly bickering, which, in turn, builds to a cathartic and moving point of release in act two. But for all the entertainment along the way, and the great performances, especially from Mudge (The Big Meal, Into the Woods), Ross's play doesn't amount to anything that feels particularly new or fresh. That's not a sin, but it's also not a feather in its cap. With a "life goes on" conclusion, I left Of Good Stock being glad to have seen the performances, but underwhelmed with the story they told.
Alicia Silverstone Jennifer Mudge Kelly AuCoin Melissa Ross Of Good Stock off-Broadway