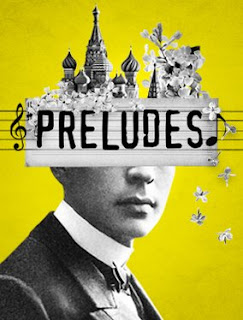 Dave Malloy's new show, Preludes, is "inspired by the music of Sergei Rachmaninoff." If only Rach knew the impact he would have he might not have gone through the tsuris that is the action of Preludes.

The title is taken from Rachmaninoff's breakthrough work, but it's so much more. Preludes are a hint of what's to come, yet it's the very excitement created by that hint, that taste that paralyzes Rachmaninoff and makes him loathe to write more. As noted in the program, Rach's "Symphony no. 1 in D minor, opus 13" premiered when the composer was 24, and the performance was a disaster. He was so stung by the reception that he developed a three-years-long bout of writer's block. 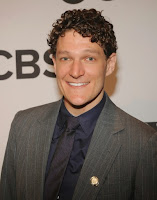 As Malloy (Natasha, Pierre and the Great Comet of 1812) explores in his play, the icy reception wasn't the only thing keeping Rach from writing. Set inside Rachmaninoff's mind, Preludes is an imagination of what happened in Rach's sessions with hypnotherapist Nikolai Dahl (Eisa Davis), which he attends at the behest of his wife, Natalya (Nikki M. James). We see Rach (Gabriel Ebert) interacting with Nikolai, Natalya, his opera singer friend Chaliapin (Joseph Keckler), and some of the greats, like Chekov, Thaikovsky, Tolstoy, the tsar and others (all played by Chris Sarandon), while Rachmaninoff (Or Matias), the musician Rach wants to be, plays the piano. (Bravo to sound designer Matt Hubbs for creating a blend that estimates the way Rach hears everything, with the music often drowning out the conversation.)

In setting his play this way, Malloy (and director and co-developer Rachel Chavkin) looks inside the artist's mind: all the hopes; all the fears; all the potential; all that's left to figure out. (The chaos of Rach's mind is brought to life in Mimi Lien's scenic design.) It's a look at a composer who "just wanted to really play piano." Note that the intensity isn't in his desire to play, it's in the way he wanted to play. (This can help to explain why Rachmaninoff is known for bigger, more accessible pieces.)

The characters with whom Rach interacts, especially the "gods" played by Sarandon, challenge him to figure out who he is an artist and what his music means; challenge him to comes to terms with his audience and the virtue (or lack thereof) of a legacy; challenge him to make peace with the pressure of living up to past greatness and past failure.

Perhaps one of the most poignant moments comes at almost the last moment. Rach is having a conversation with an anonymous character (also played by Sarandon). In every other interaction with Sarandon's "god" characters, the god introduces himself and Rach says, "I know who you are." In this instance, the character says lovely, inspiring things to Rach, things that make Rach think he is worth something, after all. Rach then looks at the character and and asks, "Who are you?" The character responds, simply, "I'm just a guy, and there are lots of me."

Along with synth players Wiley DeWeese and Emily Marshall, the estimable cast is impressive. Tony winner Nikki M. James (The Book of Mormon, Les Miserables) is understated as Natalya; Eisa Davis (The Call) is supportive and encouraging as the hypnotherapist, Nikolai. Or Matias's playing will knock you out. But it's Tony winner Gabriel Ebert (Matilda, Casa Valentina) that stuns. This sensitive, fearless actor paints a complex portrait of an artist as a young man. It's a virtuosic performance, one in which Ebert leaves the stage only once and for only about 30 seconds. Ebert throws himself into the role with a courage and abandon only seen in those artists you're sure to remember, just what Rachmaninoff wanted.
Preludes is running through August 2. Visit lct.org to learn more and to purchase tickets.
Dave Malloy Eisa Davis Gabriel Ebert LCT3 Lincoln Center Nikki M. James off-Broadway Or Matias Preludes Rachmaninoff