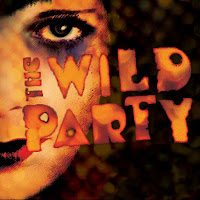 Quick thoughts about the Encores! production of Andrew Lippa's The Wild Party, from someone who was unfamiliar with the show beforehand:

Queenie and Burrs's ambivalence is intriguing. Sutton Foster is slinking around the stage, exploring a dark sexuality, not something casual and bubbly but something deeper and more complex, something with higher stakes. Steven Pasquale is brooding. It's hard to deny his appeal, even as an abusive character, it is easy to see how a woman could fall for and continue to be with a man like that—despite his controlling nature. It can be difficult to leave, to break free from someone like that. I'd like to read the book, to know what else I'm missing and how the story develops outside of the songs. Brandon Victor Dixon has a quiet confidence, just as the character is described. There's a thrill in the inherent risk of a wild party. It is as alluring as it is frightening, with the poles bolstering each other. This production concludes with a new song, one in which Queenie owns her actions. It's dark and emboldening.
Steven Pasquale sutton foster The Wild Party