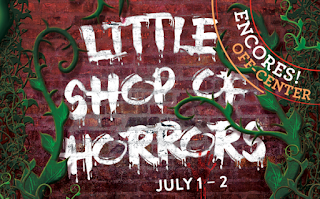 In 1981, lyricist and book writer Howard Ashman got an itch to create a musical adaptation of Roger Corman's B-movie, The Little Shop of Horrors. It was far from an obvious choice for an adaptation of any kind, let alone a musical. As his sister, Sarah Ashman Gillespie, recalls in program notes, she and some other confidants tried to dissuade Howard from the venture. Lucky for all of us, he was determined.

The original production (directed by Ashman) opened in May 1982 at the WPA Theatre, and transferred to off-Broadway's Orpheum Theatre in July of that same year. It went on to run for 2,209 performances, and was adapted into a movie in 1986. It was a success in its time, and it continues to be a cult favorite. This unexpected story set on Skid Row has tickled audiences for 33 years (and counting), and thanks to Encores!, a few thousand lucky people got/get to see it on stage in New York—with Ellen Greene, the original Audrey. 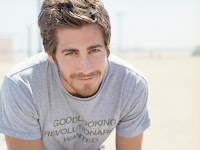 Little Shop of Horrors, with music by Alan Menken, tells the story of down-on-his-luck Seymour (Jake Gyllenhaal), a lonely, nerdy guy who works at Mushnik's Flower Shop. (Joe Grifasi is the shop owner.) Audrey works with him, and though Seymour pines for her, she dates the abusive Orin Scrivello, DDS (Taran Killam). The flower shop isn't doing much business, but Seymour might have a solution. After a total eclipse of the sun, he came upon a strange and interesting new plant, which he's named Audrey II. (Young Audrey II is played by Anwar Kareem; big Audrey II is played by Eddie Cooper.) The plant is drawing lots of attention and customers but, lo, Audrey II dines on blood. What's a guy to do? (The goings on are punctuated by a Greek chorus of street urchins, Tracy Nicole Chapman, Marva Hicks and Romona Keller.)

I could watch this every night for the next year and not get tired. Ellen Greene is fulfilling all our Audrey fantasies. As our theatre-fan-in-chief Lin-Manuel Miranda said, she "stepped out of a time machine from 1986, same dress and hair and voice." What a thrill to be witness to it. Jake Gyllenhaal (Constellations, Nightcrawler) is so good at getting into character. He looks like he's drawing into himself, making him look smaller, more like the nebbish Seymour is. And, on top of that, he has a good voice. Really good. Taran Killam (SNL, 12 Years a Slave) is a true showman: vocal chops; comedic chops; dance moves—he can write his own ticket.

Productions like this (minimal scenic design, virtually no props, only nine players) show you how little you need when you have such good bones. This weird, macabre musical is so earnestly quirky and unabashedly itself. I remember sitting in the living room with my mother and listening to the cassette of the movie soundtrack as a tyke, and seeing a community theatre production around the same time. I've loved the show ever since. It holds up. I loved this. Loved. Every. Moment. 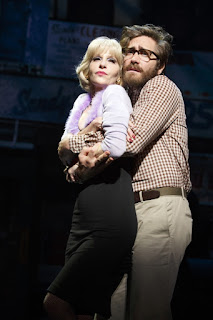