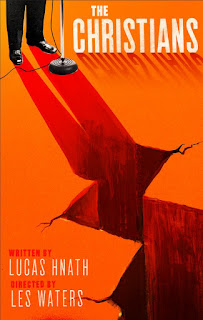 "I have a powerful urge to communicate, but I find the distance between us insurmountable." Pastor Paul tells his congregation that this is what he wrote on a note he passed to a woman on a plane in an attempt to woo her. (It worked, as the woman, Elizabeth (Linda Powell), later became his wife.) It's also a fitting epigraph to The Christians, Lucas Hnath's new play, succinctly explaining the Christians' struggles.

Paul (Andrew Garman) is the leader of a megachurch, and on this particular Sunday, the pastor is telling his flock about his new understanding of God's word, and what that means for his church. This new interpretation of the Holy Scripture doesn't sit well with others in the congregation, including the associate pastor, Joshua (Larry Powell). As the schism shows itself, Paul invites Joshua to leave the congregation.

We later hear from the church elder, Jay (Philip Kerr), who expresses the board's concerns with the division. (Some congregants left with Joshua). During another service, a congregant, Jenny (Emily Donahoe), powerfully asks Paul for answers. She lets him know how his, essentially, dismantling of the basic tenets of the church have shaken her to her core. And we also get to see that the schism reaches beyond the congregation and into the bedroom, as Paul and Elizabeth argue about Paul's newfound beliefs and how he communicated them.

There are many layers to The Christians, and multiple ways to interpret it. Looking at it on the surface, it is a dramatized debate over the fundamental beliefs of "the church." While the points raised and arguments made on that front are interesting and meaningful, and while I, of course, have an opinion on religion in general and Christian beliefs in particular, what is sticking with me the most is the distance we must overcome in order to truly talk to one another.

Playwright Hnath and director Les Waters have all the actors using corded, hand-held microphones. The cords provide additional obstacles to effective communication, despite the amplification provided by the mics themselves. (It also puts private conversations on blast, yet another obstacle to effective communication.) We come to understand what Hnath has been preaching: We all feel a powerful urge to communicate, but the distance between any two beings can be insurmountable. This is true in interpersonal relationships, and it is also true in terms of individuals' relationships with religion, with "man's search for meaning," to borrow from Viktor Frankl.

Hnath deftly examines how what we say matters; how meaning can change over time; how little is ever wholly private. He challenges audiences to think critically about what we say and what we believe, and to make the effort—even if it's a great one—to communicate. And when you feel the powerful urge to communicate but find the distance between you and your conversation partner insurmountable, take solace in these words from Elizabeth, "Just be patient. This will all make sense later."
Lucas Hnath off-Broadway play playwrights horizons The Christians