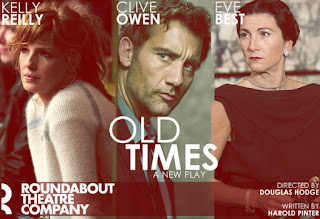 Have you ever remembered something that didn't happen? Maybe you're with friends and reminiscing about, ahem, old times? In Harold Pinter's Old Times, a married couple, Deeley and Kate, and an old friend, Anna, get together, and for a little over an hour, they mine the depths of their memories, with Deeley and Anna battling for Kate's favor.

There's a complicated history among the three of them—or is there? Pinter is vague, which is part of the delight in seeing this brought to life. Deeley, Kate and Anna's story is open to interpretation, and so it's up to the director (in this case, Douglas Hodge), the actors (Clive Owen, Kelly Reilly and Eve Best) and the design team to make some choices. And they make great choices.

Owen, making his Broadway debut, is the perfect cad. Handsome and little cocky, his charisma is difficult to resist, yet he colors Deeley (whose name is never spoken in the play, if memory serves) with hints of vulnerability and wild passions that make for a full character. Though the character of Kate has the potential to be flighty and lightweight, the stunning Reilly (so well dressed in Constance Hoffman's designs) brings a knowing depth and intelligence to the role, making it easy to see why Deeley and Anna are so keen to win her affections. And Best, making a welcome return to Broadway, commands the stage as a woman who is sure of her intentions and is not to be trifled with.

Moreover, I thrilled over Christine Jones's scenic design. Jones (a Tony Award winner for American Idiot) dresses the stage with a scenic painted backdrop (complemented by Japhy Weideman's lighting design); the circular lines, mirrored on the playing floor (more on that in a moment), look like they could be the groove marks on a record, or they could be a vector, some sort of time warp in which these characters are forever swirling. (The characters are further haunted by Radiohead's Thom Yorke's original score.)

That sense of repetition, of being in some sort of purgatorial loop, is palpable in the playing floor, which rotates almost imperceptibly. You don't see it moving the way you see the turntable revolve in Hamilton, for example, but if you're paying attention, after a while you'll notice that the chair and lounges are in a different place. We and the characters are seeing things—literally—from a different perspective. Few things are stationary, most strikingly a huge slab of ice. It's used as a window, but of course the ice is cloudy. You can't get a clear view. Just as Deeley, Kate and Anna (and the audience) can't be quite sure what happened and what's happening.
Broadway Clive Owen Douglas Hodge Eve Best Harold Pinter Kelly Reilly play revival Roundabout