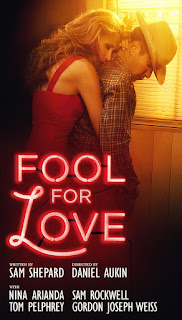 There was an exciting pre-show at the Biltmore Theatre on the night I saw Fool for Love. The older couples behind me were having a lively conversation, which, at one point, ventured into the uneven distribution of legroom among their seats. (When asked if one seat had more than the other, one of the gentleman quipped, "I don't know. I didn't bring my tape measure.") A few seats to my left, an older man was whistling to himself, providing the pre-show house music. As the theatre filled up, an awards prognosticator for The Hollywood Reporter sat in front of me and Oscar nominee and playwright Jesse Eisenberg (The Social Network) sat next to me. Then the Sam Shepard play began.

I wanted so badly to love it madly. I wanted to be enthralled with the tumultuous relationship between Eddie (Sam Rockwell) and May (Nina Arianda). But I just wasn't. It simply isn't something I can get excited about as a dramaturg, though the performances from the leading players are terrific.

Fool for Love is set in a worn down motel in the Mojave Desert, (effective scenic design by Dane Laffrey), where May has run to get away from Eddie. Being a fool for love, Eddie has trekked from afar to have a reckoning with May. Throughout, The Old Man (Gordon Joseph Weiss), seated just outside the frame of the motel room, interjects with forlorn monologues. Eddie seems to be the only one who hears or responds to him, and so we come to understand that The Old Man is part of some hallucination of Eddie's, or some part of Eddie's psyche. (Justin Townsend's lighting design helps to clarify the matter.) Late in the 75-minute play, May's date, Martin (Tom Pelphrey) arrives, which gives Eddie and May an excuse to make their cases to a third party. 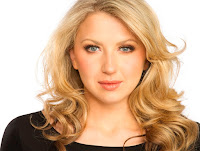 The lovers' quarrel between Eddie and May began as something interesting. Before long, though, May's ambivalence became trite, despite Tony winner Nina Arianda (Venus in Fur, Tales from Red Vienna) layering May with defiance, friskiness and a touch of vulnerability. What kept my attention was the laconic Sam Rockwell (A Behanding in Spokane). 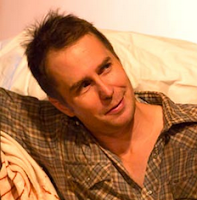 It's easy to see how Eddie could be a serious, imposing figure, someone May (and possibly the audience) might be scared of, a no-nonsense, menacing guy who could inflict grave harm. Instead, in Rockwell's hand (and under Daniel Aukin's direction), Eddie is sort of charming and funny. He's a little quirky and odd.

To be sure, it is clear he and May do not mix and that he is far from an angel. Yet, Eddie retains what I can only describe as a Rockwelliness, which fans of the character actor will understand. For me, this unexpected interpretation was the most winning part of the production.
Broadway Daniel Aukin drama Fool for Love Manhattan Theatre Club nina arianda play Sam Rockwell Sam Shepard