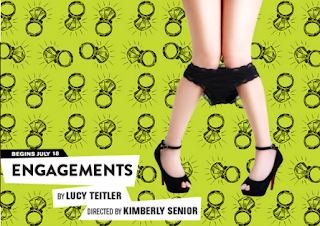 According to the definition posted in the lobby, "engagements" has three meanings:
In her play, Engagements, playwright Lucy Teitler explores all three meanings, showing the ever-blurring line between them.

Set mostly at a series of engagement parties, Engagements begins with Lauren (Ana Nogueira) speaking into a microphone, telling us her inner monologue. She is admiring her best friend, Allison (Jennifer Kim), and remarking that Allison's beau, Mark (Michael Stahl-David) is unremarkable. He's just average, she bemoans.

But sometimes, as the sage Paula Abdul notes, opposites attract, and all's fair in love and war, so, wouldn't you know it, Lauren and Mark end up sneaking off to a gazebo for a (maybe dangerous) liaison. The rest of the play (which includes a visit from Lauren's cousin, Catherine (Brooke Weisman), and Catherine's boyfriend, Ryan (Omar Maskati)) finds Lauren wondering what to do, figuring out her next move, pondering the rules of engagement.

It is a tidy and engaging play, well-written and well-executed (direction is by Kimberly Senior). Though literary allusions abound (Lauren is pursuing a PhD in Victorian literature), the dialogue sounds natural, and the detours into inner-monolgue-land offer fun and funny diversions. (Also fun diversions: the on-stage dance parties during scene transitions.) I like that Teitler is unafraid to show women behaving badly, reminding us that it's OK to be complicated; to not have it all figured out; to be a little messy.

Not that the characters' actions are particularly noble or commendable. As I was walking out of the theatre, the two women behind me commented that "non of them were sympathetic." That's true, and that's also life. People make mistakes—big mistakes. (Lauren invokes Freud, who said that there are no accidents. She concedes that point but notes that even if there are no accidents, there definitely are mistakes.) I wanted to make that point to the women, that just because you didn't feel sympathy for these characters doesn't mean they aren't real and worthy of attention. But I didn't want to start a conversation; I had another engagement.
Ana Nogueira Brook Weisman comedy Engagements Jennifer Kim Kimberly Senior Lucy Teitler Michael Stahl-David off-Broadway Omar Maskati play Second Stage