Coming Up
The Barrow Street Theatre will be turned into a working pie shop this winter for an off-Broadway revival of Sweeney Todd, the Stephen Sondheim–Hugh Wheeler musical. Performances will begin February 14, 2017, with opening night set for March 1. The production comes via London, where the show was performed in Britain's oldest continuously operating pie shop. Broadway.com has more.

A new comedy series is coming to Netflix. Created by Nick Stoller (Forgetting Sarah Marshall) and Francesca Delbanco, the series, Friends from College, focuses on (you guessed it) a group of people who've been friends since college (Harvard, to be specific). The cast includes Keegan-Michael Key (Key and Peele), Cobie Smulder (How I Met Your Mother), Annie Parisse (The Layover, Vinyl), Nat Faxon (The Descendants), Fred Savage, and Jae Suh Park. The series will shoot in New York this fall. Variety has more. 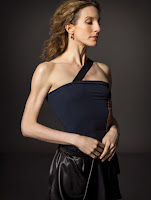 Restless Creature, the Wendy Whelan documentary, will debut at the New York Film Festival this fall. Film makers Linda Saffire and Adam Schlesinger followed Whelan from pre- to post-NYCB retirement (Whelan retired from NYCB in October 2014), and focuses on how the prima ballerina relearned her body and how to use it to express herself through dance. Restless Creature will be screened on October 9 and 10. Visit the NYFF website for more.

This fall, a slew of new comedy specials will debut on Netflix. Entertainment Weekly reports that the streaming service will feature specials from Dana Carvey; Michael Che; Reggie Watts; and others. Meanwhile, over on Showtime, comedy lovers can catch Martin Lawrence's first stand up special in 14 years beginning September 9. The Wrap has details.