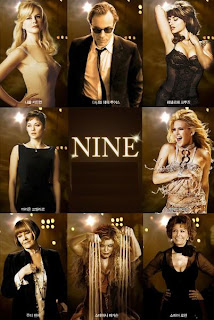 Nine doesn’t get a 10, but maybe an 8½. I enjoyed watching Nine and most of the performances so despite many of the trade reviews telling you nein, I say yes. After seeing Nine and reading the reviews, it seems to me that most of the reviewers had hard and fast ideas about what they thought the movie should be and how they wanted it to be filmed but they weren’t the ones making the film and should have, instead, tried to watch and appreciate the movie for the actual filmmaker’s vision. Many a critic complained that the cuts between the “fantasy” and “reality” (and I use quotes because with Guido, even his reality is full of fantasy) were choppy but I disagree. I thought the splicing back and forth worked very well, as it gave you a sense of what it might be like inside Guido’s head - constant motion, flitting from thought to thought. I also read a review (I think this one was in NY Magazine in which they tend to be more conservative and rather snotty) in which the critic had a problem with the fantasy performances taking place on a stage even though Guido was a filmmaker. Well, this critic obviously wasn’t paying attention: The stage upon which most of the performance numbers took place was the stage Guido built as a set for Italia, the movie he’s trying to make, so this made perfect sense. Moreover, Guido is clearly a theatrical character so it doesn’t take too much of a leap to concede that he might envision these musical numbers on a stage.


As for those musical numbers and the women haunting Guido (played by chameleon Daniel Day-Lewis, who was perfectly charming as our eccentric protagonist) - with two exceptions I thought they were terrific. I’ll start with the exceptions and then get on to the praise. I have never cared for Nicole Kidman and her stiff performance here didn’t help. I’m sure many will disagree with me, but I think she looks like a rat, which is not something I want to look at for several minutes on a big screen. Moreover, her accent in just about everything I’ve seen her in misses the mark and she was off-target here, too. The other exception is Sophia Loren. Her actual performance was fine - nothing to write home about but nothing much to complain about, either, but her face looked so plasticized and artificial she looked like she belonged in Madame Tussauds.


All the other ladies were great, though. Let’s run through the list: