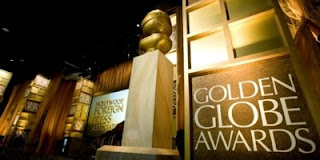 Phew! We have one award show under our belts and a few more to go until the big O. (Critic’s Choice Awards were handed out last week; I’m taping the re-broadcast and will be sure to have a few updates afterwards.) The SAG Awards are on this Saturday night and then February 2 Oscars nominations are announced. In the meantime, let’s wrap up the Golden Globes.

First, the fashion. Apparently it was raining all across America because as I traversed through NYC in the rain on Golden Globes day, the luminaries walking the red carpet in LA were treated to a shower, as well. There were tons of umbrellas on the red carpet, including Neil Patrick Harris’s black Gap umbrella, which happens to be the exact same one I have and was using just hours earlier. (Excellent taste, Neil!)

As for the actual clothes, there was nothing that was too horrendous which is not to say I liked everything. One trend I disliked was hot pink. I noticed a few ladies wearing it and it just looked wrong. A full length hot pink dress (some with puffy sleeves) looks wrong on a grown woman. Another trend was green - lots of ladies rocking different shades of green, including Amy Adams in a deep green cocktail dress paired with burnt gold accents. The one-shoulder strap trend was in full effect - that was probably the biggest, most consistent trend of the night. Ladies, I’m not saying you’re passe but I am saying that I rocked a one-shoulder column gown for my prom nine years ago. There was also a lot of black on the red carpet, too; I suppose black dresses are never out of style, but there seemed to be a higher concentration of black dresses than in previous years.

Some misses: Elisabeth Moss - I like her from her The West Wing days and she was good in last season’s Speed the Plow, but her short banged bob mixed with a long layered necklace made her look like a flapper; Toni Colette and Anna Paquin looked good in their gold bejeweled dresses, but I feel like I’ve seen those dresses before and I wanted to see something not quite as derivative looking; Tina Fey’s dress fit her well in the bodice, but the pattern was a little casual and the big hoop, tea-length skirt just looked silly.

Some near hits: Jane Lynch looked regal and elegant in a deep olive halter top gown, but it looked like the skirt part could have used a steaming;

Drew Barrymore has been wearing a lot of flesh colored gowns recently (she looked great in a nude blush number at the Emmys) and this crystaled dress looked great, except for the hip adornment - the embellishment looked good on her shoulder but not on her hip; Fergie looked very pretty in a light, Grecian lavender column dress but her face looked too dark - her hair was very dark and it was mixed with dark smoky eyes and pale everything else, giving her no color on her face.

Some hits: Cory Monteith looked dapper in Hugo Boss, and actually looked like the 27 year old he is, instead of the 17 year old he plays on Glee; Lea Michele looked gorgeous (as always) in Oscar de la Renta - she wore a fitted, almost bustier bodice, which seems to be her go to, but it was finished with a beautiful, layered fluffy bottom that actually fit her petite frame very well; Neil Patrick Harris, Matthew Morrison, Joseph Gordon-Levitt, Leonardo DiCaprio and George Clooney all looked dashing and classically handsome in their tuxes. (My guess is Leo and George were wearing Armani, as per their usual routine. Also, I liked that Joseph wore a Hit RECord lapel pin, a bit self-promoting but it was unobtrusive and therefore appropriate.) Robert Downey, Jr., looked good as he mixed it up by going sans tie and sported detailed button covers; Vera Farmiga looked smoky in a black dress with a trumpet bottom, adorned with subtle rose

appliqués; Will Arnett and Amy Pohler looked great together, he in a simple tux with a hip skinny tie and she in a saturated red one-shoulder gown; Marion Cotillard looked stunning in a deep forest green Christian Dior dress - it had visual interest in the bodice, with pieces crisscrossing each other, rocked the one-should trend and unlike some other people on the red carpet, had a tasteful front slit (I’m looking at you, Jennifer Aniston - a slit all the way up to your pupik is not classy.) Tune in to E! for Joan Rivers’s fashion review. 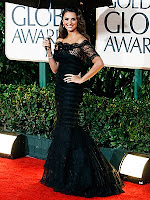 Favorite red carpet moment: Penelope Cruz, looking classy and sophisticated in a black gown, was asked how she was coping with the rainy weather. She shrugged it off saying it was no big deal, “I’m not like Puff Daddy, I hold my own umbrella!” Te amo, Penelope.

And now on to the actual award show. A full list of winners will follow below. Generally, I thought this was a good, entertaining broadcast. Ricky 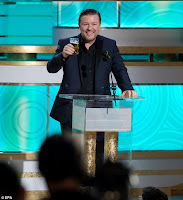 Gervais did a great job as host, bringing his signature dry, British wit stateside. He stuck the room (and NBC) with their fair share of verbal harpoons, but each one was funny, so it was okay. As he mentioned at the end of the broadcast, which pretty much ran on time thanks to a lack of ancillary presentations and montages, Gervais’s new TV show will air on HBO in February and I’m definitely looking forward to it.

Here are some of my favorite moments of the night:
And now, the list of winners, with some commentary, where applicable, of course! (The winner is underlined and bolded.)
Check out Broadwayworld.com's photo coverage of the arrivals, part one and part two, for tons of photos of the beautiful people. In part one, note the fabulous looking Julie Bowen, Jessalyn Gilsig, Linda Edelstein, Jeff Bridges (in stylish black on black), the always unique Quentin Tarantino, The Edge and several Glee misfits. In part two, look for more Gleeks, Ginnifer Goodwin looking radiant in cobalt blue, the attack of grown women in hot pink and the happy and talented coupling of Emily Blunt and John Krasinski. Take a look at their photos from the press room to see all the winners and presenters.
awards glee movie TV