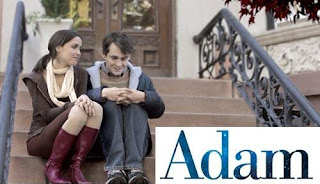 Just watched a sweet love-story movie called Adam. The story concerns a young man named Adam, who has Asperger’s syndrome and his new neighbor, Beth. (Adam is played by Hugh Dancy, a Brit, and Beth by Rose Byrne, an Aussie. Both are good in Adam and put on near perfect American accents.) As she gets to know Adam, Beth is taken with his sweetness and openness. Because of his Asperger’s, Adam really can’t help but be honest and forthcoming; he can’t lie and he doesn’t quite understand nuance or euphemisms. By spending time with Adam, Beth learns to be more direct and to choose her words carefully – she learns the power that different words have and rather than play games with a potential beau, she is forced to be straightforward and express exactly what she wants and is thinking. It’s a very sweet film with a slightly tidy but ultimately satisfying ending. What I liked most is that is made me think about how we interact with each other and the kinds of dances we’ve created to get around the truth. While I love dancing around to a Creedence vinyl on Sunday mornings, I don’t care to do it in interpersonal relationships.

Adam is now out on DVD. Update your Netflix queue and let me know what you think!
movie netflix