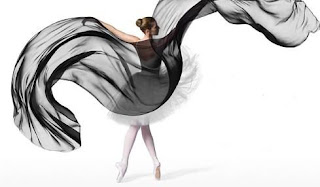 The 2010 New York City Ballet Winter Season has begun. Saturday evening’s program consisted of two pieces, Naïve and Sentimental Music and Who Cares? The latter piece, set to the music of George Gershwin and choreographed by City Ballet co-founder George Balanchine, premiered at City Ballet in February 1970 and represents the tradition in this duo (or so it seems at first) while the former is a brand new ballet from City Ballet’s Ballet Master in Chief Peter Martins and is set to composer John Adams’s music. I’ve always preferred Jerome Robbins’s choreography to Balanchine’s and with Robbins’s influence evident in Martins’s ballet, I stuck to my pattern.
Peter Martins has been with City Ballet, in varying capacities, for 40 years. Joining the company as a principal dancer in 1970, Martins trained under both Balanchine and Robbins and it shows in his choreography. In my opinion, Balanchine’s ballets tend to be pretty but lack drive. His choreography goes with the music but isn’t dictated by the music, the way Robbins’s is. With Robbins’s choreography, you see the music in his movements - the dancer does a pirouette because the music told him to. Balanchine’s choreography always seems to be more concerned with looking pretty and showing off technique. So when Martins choreographs, you see glimpses of both styles and this makes for an often lovely and captivating ballet. 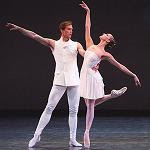 Naïve and Sentimental Music is divided into three movements, “Naïve and Sentimental Music“, “Mother of the Man” and “Chain to the Rhythm“. Throughout all three pieces, almost every City Ballet Principal Dancer is utilized, nearly ensuring excellent execution. The first movement is spirited, playful and sweet (perhaps the naïve of the title.) With its whimsical dancing this movement feels particularly youthful. The aesthetic is appealing, too. With no set or even a backdrop, the focus is entirely on the music and movement. The female dancers are in shades of blue and green jewel tones so when they move in their light chiffon dresses, it looks as if emeralds and aquamarines and sapphires are flowing all around the stage.
The second movement, “Mother of the Man“, was all in white and featured three pairs of dancers. While one pair was center stage, the other two were behind them, in a corner, not mirroring the featured couple but “sympathizing” with them. By this I mean the corner couples’ movements were of the same theme as the featured couple but they weren’t repeating the same steps. This movement was slower with a more muted energy, evoking a much more wistful, almost elegiac tone, one of remembrance or, as the title of the entire piece suggests, sentimentality. This second movement seemed to suggest that the couples were remembering their youth and looking back over the years. I should note that Darci Kistler was one of the three female dancers in this movement. Kistler has been with City Ballet for thirty years and became a principal dancer in 1982. She’s still got it. Long and lithe, Kistler glides across the stage with grace and she easily outshone her younger dance partners.
The third movement was a fiery and passionate piece. The men were in vibrant gray (I know that sounds slightly oxymoronic but they gray did not appear drab - it really popped) and the women

were in varying shades of red, of the bright ruby and delicious candy apple and cherry varieties. This movement was slightly reminiscent of the first, except that while spirited, this movement seemed more precise and purposeful whereas the first was less structured. Also standing out in this movement was Robert Fairchild, a new principal dancer. Fairchild has been with the company since 2006 and was promoted to principal dancer this season. He is a fierce, strong and impassioned dancer and after his first pas de deux, I was eager to see him on stage again in the Balanchine piece later in the night. (He didn’t disappoint there, but more on that in a moment.) At the end of the third movement, all the dancers came out for a final dance, filling the stage with beautiful jewel tones and black and white punctuation. It was thrilling to see so many principal dancers at the top of their game on stage at once and a wonderful ending to a great piece from an exciting modern choreographer.
There were a few things that struck me throughout the Martins ballet. One was that in each piece you could hear clocks, which only made the distinction between the youthful first movement and the aging second one all the more palpable. The second thing I noticed was there was an acoustic guitar in the orchestra. This was thrilling for me, because I think there’s nothing better than sounds that come from an acoustic guitar, but it is unusual, in my experience, to find guitars in orchestral pieces and particularly at the ballet. Finally, throughout all the movements, the choreography seemed not entirely structured and the dancers were sometimes not entirely in unison - I thought this was terrific. This added to the ideas of being either naïve, sentimental or both. That the dances were unstructured suggests to me a touch of naiveté in that in one’s youth and inexperience (if you’ll pardon the Reagan campaign quip) he or she might not stick to the prescribed structure or rules of the day. And the slight lack of cohesion among the dancers speaks to a state of sentimentality - when you might be remembering something but not correctly and when folks thinking back on a shared memory might not remember everything in exactly the same way. I’m sure that this interpretation was in Martins’s mind as he was creating this ballet, as he is too good of a choreographer and the 24 principal dancers and two soloists comprising the cast of Naïve and Sentimental Music are too good at what they do for this to be simply an off night. Indeed, they were all on and the jewels glistened throughout. 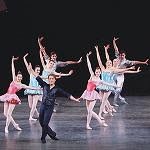 From an innovative piece based in the tradition of the founding choreographers to a piece by a founding choreographer that is not particularly innovative but highly traditional, Who Cares? is typical Balanchine but it is enhanced by a fun and energetic Gershwin score. Who Cares? is made up of 17 Gershwin tunes, including the classics “Embraceable You” and “I Got Rhythm“. The first several songs were danced by the company corps and in them we saw the difference between a corps dancer and a principal dancer. No one in the corps was particularly memorable (except for the two dancers who fell (at different times) throughout the course of the piece) and while I understand that in a chorus you’re not supposed to stand out, you’d think that someone in the chorus would be interesting to watch but that was not the case here. Instead, I saw dancers who looked uncomfortable in their costumes as they went through the motions of executing this 40 year old ballet. Most of the time, when a principal dancer is on stage, or even a good soloist, you can’t take your eyes off of him or her. And this was the case when the three principal and one soloist dancers took the stage about halfway through the piece. Once again, Robert Fairchild was commanding and thrilling on stage. I’m definitely looking forward to watching him in the company for many seasons to come. One of the great treats of watching him, and one of his pas de deux partners Sterling Hyltin (also a young dancer, she became a principal dancer in 2007) was that they both looked like they were having fun dancing. It’s such a drag to watch a performer, in any medium, make their performance look perfunctory and like they’re performing out of an obligation, rather than a passion for art. So when Fairchild and Hyltin come out and play on stage, it’s especially fun to watch. The final tune of Who Cares? is the Gershwin standard “I Got Rhythm“. I don’t know if it’s because I’m so used to listening to the Crazy for You cast recording, but when I think “I Got Rhythm“, I think tap dancing. Alas, there was no tapping on stage in the State theatre on Saturday night, so I started tapping my toes during the closing number. I tried to do so quietly so as to not disturb my seat mates, but, like Blanche at Rydell High, when I hear music, I just can’t make my feet behave.
balanchine ballet nyc ballet