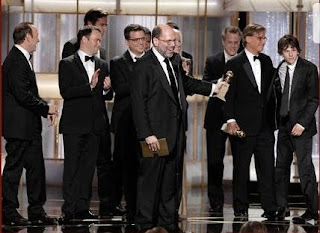 The 2011 Golden Globes are wrapped! Last night the stars walked the red carpet before heading inside for the award ceremony. It was a fun broadcast, with snarky Ricky Gervais serving as the master of ceremony. I particularly liked this line from his opening monologue: Talking about snubs, he quipped, “I Love You Phillip Morris. Jim Carrey and Ewan McGregor, two heterosexual actors pretending to be gay. So the complete opposite of some famous Scientologist, then. [a beat] My lawyers helped me on the wording of that joke.” Zing! It was that kind of night. Very funny, in my opinion. 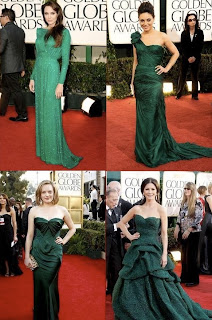 But, as always, before we get too far into the actual award part of the night, let’s talk fashion. There was a lot of color on the red carpet. Some black, but lots of bright, sometimes shocking colors. There were several ladies wearing dark blue, like Amy Adams and Tina Fey, as well as several peach or nude colored frocks, like Anne Hathaway and Emma Stone. (Note to Emma Stone: I loved you with the red hair and before the spray tan; now you look like Lindsey Lohan. Bring back the red, Emma!) A big trend in the color department seemed to be green. As it’s my favorite color, I liked this trend. Above, I have the green quartet: Angelina Jolie in Versace; Mila Kunis in Vera Wang; Elisabeth Moss in Donna Karen; and Catherine Zeta-Jones in Monique Lhuillier. I think Mila rocked the green the best, between the rich, saturated color looking fabulous with her coloring and the dress having great structure. 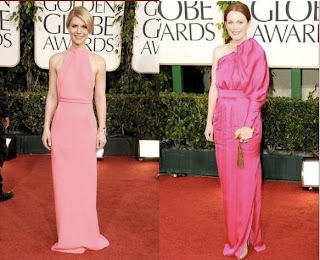 Next we have a pair in pink: Claire Danes in Calvin Klein and Julianne Moore in Lanvin. Claire wore it best. The combination of the hot pink and the neck throwing up all over her shoulder made Julianne look like she was being swallowed by this number, while Claire simply looked pretty in pink. It was a nice shade in a grown up cut, striking just the right balance to look age appropriate.

There were also some flowers on the red carpet. Several daisies, in fact, all over Michelle Williams’s Valentino dress (at right). Some on TV were saying she looked fabulous. I thought she looked like she was going to a summer barbecue. And if that’s where she was going, the dress would have been cute and fresh and fun. But it was way too casual for the occasion, especially since she was sans any sort of glamourous jewelry or make up. There was just nothing special about it. (If she was going for a pixie, free spirit look, and didn’t want to seem like a slave to the fashion gods, she could take a cue from Kyra Sedgwick, who, this year and at last year’s Emmy’s, exemplified hippie chic.)

The other flower was the bright, jeweled rose affixed to the front of Natalie Portman’s Viktor + Rolf baby pink dress (camouflaging the baby bump). On the red carpet, Portman noted that being pregnant allows her to finally dress the way she wants to, which is in flowy, oversized duds. I don’t love baby pink, but the more I look at the dress, and at Natalie glowing in it, the more I like it. I preferred the dress she wore on Friday night to the Critics Choice awards, but this one looked at once luxurious and comfortable.

Sparkles were another big trend (and fashion mags say they’re a big trend in general, not just on the red carpet). Glee’s Amber Riley got the memo, dressed in a fully sequined, one should gown. So did House’s Olivia Wilde (pictured at right) in a shimmering Marchesa dress. Obviously, this dress is strictly for the red carpet, but for the red carpet it’s definitely a statement dress, and Wilde is tall enough to pull off all the poof at the bottom.

The men all looked good, with nothing much to note. Robert Downey, Jr., wore Prada; Matthew Morrison looked dreamy, as always, in a tux and, this time, velvet shoes; Colin Firth was dashing in his tuxedo (and his beautiful Italian wife, Livia, on his arm, didn’t hurt!); and Jake Gyllenhaal was ridiculously handsome, sporting what seems to be his sexy, “I’m in between movies” beard. The only real shock when it came to the men’s sartorial choices was seeing Trent Reznor (at right, holding the award) in a tux/suit. He looked terrific, but it’s just weird seeing the Nine Inch Nails creator in a tuxedo.

And now, on to the awards. There weren’t too many surprises (although I was surprised that Paul Giamatti won for Best Actor in a Movie, Comedy; I think it was probably a case of Johnny Depp’s dual nomination working against him and Paul benefitting from the fall out) but that doesn’t mean there weren’t good speeches or nice, touching moments. So, here, dear readers, is the full list of winners with, of course, my commentary. (All categories are for feature films, unless otherwise noted.)

Best Supporting Actor, TV - Chris Colfer, Glee (He gave such a lovely, genuinely passionate speech and I loved this line: “To all the amazing kids that watch our show and the kids that our show celebrates who are constantly told ‘no’ by the people in their environments, by bullies at school, that they can’t be who they are or have what they want because of who they are. Well, screw that, kids!” Bravo, Chris!

Best TV Series, Drama - Boardwalk Empire (Does anyone else think that perhaps this marks the start of a new reign?)

(It was here that, while cutting to commercial, we saw Angelina Jolie fixing Brad Pitt’s bow tie. This might have been the cutest moment in award show history, besting the moment last year when Leo introduced Martin Scorsese to James Cameron. Also, it reminded me of Donna fixing Josh’s bow tie while Josh complains that he wants to be like Tony Bennett. Geez, I really can relate anything to The West Wing. It’s a sickness...)

Best Original Song - “You Haven’t Seen the Last of Me,” Burlesque, written by Dianne Warren

Best Actress, Comedy - Annette Bening, The Kids Are All Right!!! (I thought she gave a great speech, taking a moment to acknowledge the people who worked on the film, including the cast, writers, director and producers, and also “1962’s Golden Globe winner for Most Promising Actor,” Warren Beatty.)

Best Screenplay - Aaron Sorkin, The Social Network!!!!!!!!!!!! (Not that this was much of a surprise, but I’m so excited to see him win. Especially after he said this: “And I wanna thank all the female nominees tonight for helping demonstrate to my young daughter that ‘elite’ is not a bad word, it’s an aspirational one. Honey, look around: Smart girls have more fun and you’re one of them. I love you.” I love this man. And if you’re at all familiar with his writing, you know he really means it: Smart girls having more fun is how he writes his women: That’s Dana and CJ and Jordan. Brilliant women being brilliant and beautiful. Well done, Mr. Sorkin!

Best Actress, TV Comedy - Laura Linney, The Big C (Linney was not on hand to accept the award because she’s still performing - until the end of the month - in Time Stands Still, which, as it happened, I saw the afternoon of the Globes last year!)

Best Comedy - The Kids Are All Right!!!!

All in all, it was a good night. Good dresses, good speeches and good jokes. Next up are the SAG Awards, presented on Sunday, January 30th (and broadcast that night on TNT and TBS). But before that, next week, on January 25th, Oscar nominations will be announced. Stay tuned for full coverage!

And finally, I’ll leave you with Ricky Gervais’s final words: “Thank you to God for making me an atheist.” Goodnight!

(For more photos and gossip about the 2011 Golden Globes, visit E! Online.) 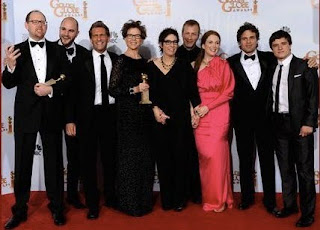