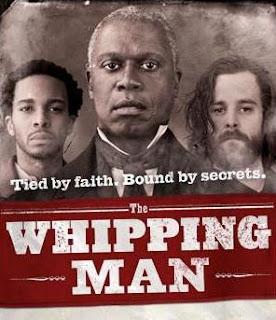 It’s not every day that you see a period play featuring just three characters that is at any given moment funny, touching and incredibly powerful. When you do find such a play, attention must be paid: Go see The Whipping Man at Manhattan Theatre Club!

In this (morality tale?) historically inspired play, written by Matthew Lopez, we meet Simon (Andre Braugher), John (Andre Holland) and Caleb (Jay Wilkison) in Richmond, Virginia, circa April 1865. The Civil War has just ended and Captain Caleb DeLeon, a Jewish-American soldier who fought for the Confederacy, has dragged his wounded body back to his family’s home, now in terrible shape, showing the wear and tear of war. He comes home to Simon, the now-emancipated slave who has been with the DeLeon’s since before Caleb was born. John, another now-emancipated slave who has been with the family for years and who is Caleb’s contemporary, also comes back to the house, though he brings with him odds and ends he’s scrounged up from other people’s abandoned homes. During this reunion (the play spans a few days), dark secrets are revealed and—here’s the powerful part—the three men conduct a Passover seder.

Such a rich set up – where do I begin?!? Well, I suppose it’s best to start at the beginning. Within the first five minutes of the play, we meet Simon and Caleb and see and hear Simon bless—in Hebrew—Caleb. I know there are black Jews around the world but in my day-to-day life and in my congregation growing up, I don’t and didn’t encounter them with any sort of frequency. So seeing and hearing a black man speaking Hebrew, reciting a Jewish prayer, was shocking, thoroughly engaging and maybe a little bit beautiful. (It was also more than a little bit disturbing to think of Jews as slave owners, given their own ancestral struggles. Perhaps it was naïve, but I just always thought that, by 1865, slavery wasn’t Jewish, that Jews were not party to this shameful piece of our American history.)

Of course, Simon and John (who will later quote the Torah) were not born Jewish but having basically been raised in the DeLeon household—a Jewish household—they have essentially become Jews by association. (I hesitate to use the “industry term” Jew by choice since, as slaves, Simon and John didn’t have much choice. More about choice later, though.) It is evident from the discussions in which the three men engage that Judaism was important to the DeLeons. This makes an exchange between Simon and Caleb rather thought provoking: Simon has just realized that it’s Passover, and he has decided he is going to make a seder the next night. Caleb protests, saying he is no longer a man of faith; he doesn’t believe in God, not after all he’s seen during the war. Simon asserts that “war isn’t the absence of God; war is the absence of God in man’s heart.”

Through Simon’s faith in God and Judaic beliefs, and through the telling of the story of the Israelites’ exodus from , playwright Lopez explores themes of bonds and bondage; the immorality of slavery; and just what exactly it means to be free. Director Doug Hughes paces the play so that everything reveals itself naturally and he gets terrific performances from his three actors, especially Braugher, who gives a bravura performance.

What drives home all these points (at least for me) is the Passover seder, which is the action of act two. During Passover, we read from the Haggadah and retell the Israelites’ story: Once we were slaves, now we are free (with plenty of Moses, Pharaoh and the ten plagues in between). I’ve sat through a seder, sometimes two, every year for my entire life. I’ve heard the bit about needing to retell the story to our children and our children’s children so that we never forget that “once, we were slaves.” But it’s never moved me; the point has never been made so powerfully and poignantly as it is here in The Whipping

Simon can’t read but he remembers the story. He starts telling the story of Passover while Caleb and John help out by reading passages from the Haggadah. As Caleb or John reads, Simon begins singing “Let My People Go,” turning this traditional Passover (almost dirge-like) song into a bona fide spiritual. Simon begins expounding on the similarities between Moses and (as he calls President Lincoln) Father Abraham. (There’s plenty of midrash to support this connection. While I haven’t personally encountered anything that argues, as The Whipping Man does, that Passover is analogous to , if you look in almost any Jewish leadership paper/book/theological study, you’ll find essay upon essay likening the two reluctant leaders, neither of whom got to actually go to the Promised Land.) These moments of watching a seder—a seder that tells the same story year after year, a seder that I’ve been party to for year after year—were incredibly powerful and moving. (Particularly powerful and moving was the moment when Simon recites the Shehecheyanu, a Jewish prayer in which we thank God for giving us life, for sustaining us and for enabling us to reach this point.) It reminded me why we really do need to tell this story every year. It reminded me that there are too many people in the world who are not free and for them we must keep fighting. It reminded me that despite my current secular state of mind, I have a moral obligation to tell the story of Passover.

Maybe this sounds like a dramatic overreaction but I assure you my reaction is sincere. This play was so gripping; and apparently I’m not the only one who thought so: For the first time in memory, my fellow audience members gave a standing ovation at an off-Broadway play that is still in previews. This does not happen. There’s something special about The Whipping

Perhaps what is most special is the question of freedom: What does it mean to be free? At one moment toward the end, John tells Simon about his gruesome revenge against the whipping man (the person who would whip the slaves at the request of the slave owner). John tried to defend his actions, arguing that there was nothing else to do but what he did—he had no choice. “You’re free now – of course you had a choice!” Simon bellows. This, the ability to make a choice, is what makes us free. (That tenant is at the core of Reform Judaism: We are humans—not animals—and can therefore make choices. So choose what is meaningful to you and go forth and prosper. (I’m paraphrasing, of course!))

The Whipping Man is a triumphant play that somehow balances some very funny moments with some very touching and sometimes macabre ones. In this run-down, dilapidated house, and in the aftermath of a not so civil war, three men struggle to find redemption. They have varying degrees of success but throughout, no one says “thank you.” This is a thoughtful choice by playwright Lopez and speaks volumes to each character’s character. As part of my final reaction to The Whipping Man, I will choose to say “thank you” to all involved in creating and bringing to life this compelling, interesting play that was executed with estimable virtuosity. Thank you for telling this story and reminding us what it means to be free.

Visit mtc-nyc.org for more information about the play and to purchase tickets. (Under 30? Great – visit MTC’s 30Under30 section to purchase a ticket for just $30.) 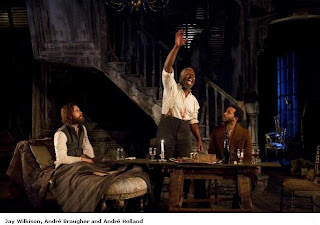 Check out this recent New York Times profile of playwright Matthew Lopez to learn about Lopez's inspiration for this powerful play.