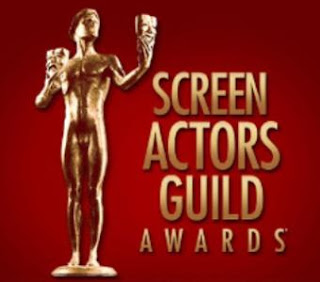 Another award show down. The 17th Annual Screen Actors Guild Awards were presented last night. This award presentation is usually bit more streamlined than the others, consistently clocking in at just two hours. (The reason: No host and no montages – except for an appropriate in memoriam.) With one exception, there were no surprises and only one minor disappointment.

But, as always, dear readers, let’s begin with the most important part: the fashion! 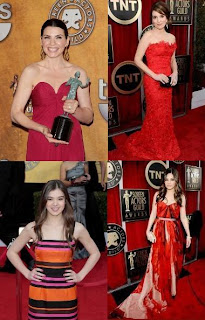 Two weeks ago at the globes we saw a lot of green. This week we saw a lot of reds and/or oranges. And these ladies were on fire! Julianna Margulies, in YSL, looked elegant and beautiful. Tina Fey departed from her usual basic (and typically safe) black and instead opted for slim-fitting bright red dress. Way to go, Tina – red’s a good color on you! 15 year old phenom Hailee Steinfeld wore a wonderfully age appropriate sleeveless colorblock dress by Prada. The column dress and its stacked colors made the tall teen rise above her peers as a model of how to look fun and fresh on the red carpet. And Mila Kunis wore a hippie-inspired Alexander McQueen dress, complete with a sweetheart neckline, a cinched in waist and long, flowing chiffon. Her long, loose locks complemented the easy going vibe of the dress. 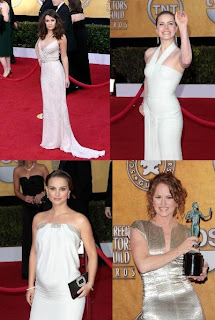 Then there were a few in white or sparkles. First, we have Miss Lea Michele in a slinky and revealing sexy goddess number. As she made her was onto the carpet, you could see her check to make sure her tape was in the right place, lest she have a wardrobe malfunction! Despite the sparkle and glow of the dress, it was a decidedly subdued look for the petite powerhouse, but that didn’t stop her from looking fabulous. Amy Adams looked fit and fresh in a beautifully structured white gown, complete with a smooth and sleek pony tail. Her look was a bit reminiscent of Hailee Steinfeld’s Golden Globes look, but ’s dress was more mature, as was appropriate, and she dressed it up with terrific earrings, showing folks how to do Steinfeld’s look in an adult way. Natalie Portman showed off her baby bump a little more than usual in this strapless Lazaro frock. She looked pretty, and I like the detail at the neckline, but I wish she’d do something a little less shellacked looking with her hair. If space suits looked like Melissa Leo’s dress, I think our astronauts would conquer the universe. This lady rocked a body hugging silver dress (with a plunging neckline), and took home a little statue to go with it! 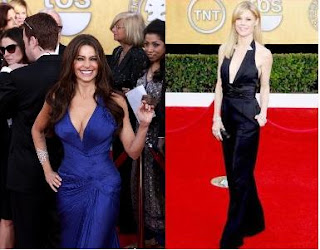 The women of modern family showed up to play! Sofia Vergara, who’d look sexy in a burlap sack, pumped up the va-va-voom in a dangerous, curve hugging Roberto Cavali sapphire blue gown. Her on screen step-daughter, Julie Bowen, took a risk by wearing a black one-piece jumper. Not many people could pull this off, but on Bowen it looked sexy and sophisticated, and hit the right notes of appropriate and playful for a night of celebrating actors. 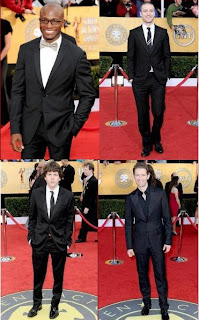 And the men looked damn fine, too! Some of them looked to change it up a bit from the typical tuxedo. Exhibit A: the delicious Taye Diggs. Mmmm. Diggs opted for a gray (or gunmetal? Where are Monica and Maureen when you need them?) bowtie, and wore a pair of specs to look way too good on the red carpet. JTims was fairly conventional in Simon Spur, but he wore a patterned tie to help bring a little sexy back to the red carpet. His The Social Network co-star, Jesse Eisenberg, looked very good in a slim Dolce & Gabanna tux. For a guy who, in interviews, seems to be totally uncomfortable with attention being paid to him, he sure did set himself up to get a lot of looks with that tux. And of course, there’s dreamboat Matthew Morrison who went for a black on black, open collar look. Looking good, Mr. Schu! (Also looking good and pictured at right, Michael Pitt, one of the incredible Michaels starring in Boardwalk Empire. Look at those eyes!)

No red carpet would be complete, though, without a worst dressed. My pick? Angie Harmon. Do you watch Say Yes to the Dress? You know that Pnina Tornai “slutty bride” dress? That’s what Harmon’s pink and feathered frock looked like. First of all, I think the color on her – with her make up and dark, severe hair – was wrong. Plus, with the see through bustier bodice and way too many feathers providing trim and the adorning the skirt, it looked more like something you’d get at La Perla and wear in the bedroom than something that’s appropriate for the red carpet.

And now on to the actual awards! There were no surprises, save for Betty White. That was definitely a sentimental win - she's having a moment. And the minor disappointment I mentioned earlier was The King's Speech winning Best Ensemble. Now, before you make assumptions, I actually wasn't rooting for The Social Network in this category. I was rooting for The Kids Are All Right. I think those five cast members - that tight ensemble - really carried and made the movie. In The King's Speech and The Social Network, there were most definitely great performances, but there were also other incredible elements at play, and neither of those felt like an ensemble to me. There were main characters and stars. The Kids Are All Right, in my opinion, epitomized an ensemble film, in which everyone gets their moment. Still, all the performances in The King's Speech were good and Geoffrey Rush gave a very nice acceptance speech.

And there it is, the 17th Annual SAG Awards. Oh, and my favorite part? Seeing Armie Hammer "photo bomb" Chris Colfer during Chris's red carpet interview with E! Would that be an "interview bomb"? Oh well... next up, the Oscars!