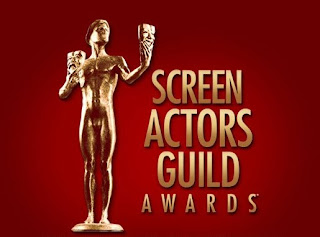 Another award show down! The Screen Actors Guild Awards were presented last night, and, I’m a little disappointed to say, it was a rather uneventful night. There were some surprises, which I’ll get to later, but overall it was a rather tame night. As always, though, let’s begin with the fashion. 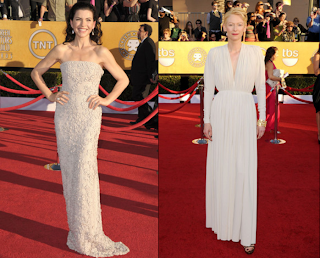 The color of the night was greige. About 80% of the ladies walking the carpet were in some shade of gray/beige/nude. For example, Julianna Margulies (above left) added some sparkle to her greige and looked fabulous in Calvin Klein. Tilda Swinton (above right) – who usually chooses something interesting and fashion forward – looked so regular in Lanvin I almost didn’t recognize her. Winner Viola Davis (right) looked like a goddess in her Marchesa dress. This white, flowy gown didn’t quite fit into the greige trend but that’s fine – it just made her stand out more. Also getting in on the trend were Kristen Wiig (below left) and Lea Michele (below right). Neither got it quite right. Wiig looked light and ethereal in Balenciaga but then she choked herself with a dog collar, ruining the look. And Michele looked almost perfect in her dress. I loved the structure of the bodice and the messy hair. But that slit! Way too high! Usually, to see that much leg you have to tune into Cinemax after hours. 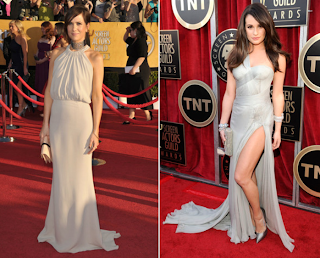 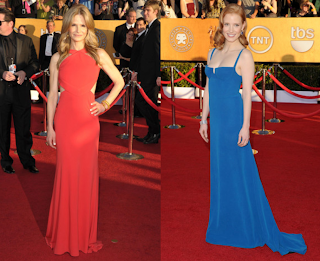 There were some exceptions to the greige trend, of course. Some ladies, like Kyra Sedgwick in Pucci (above left), looked knock-out gorgeous in impossibly fitted dresses. Sedgwick’s dress was in power red and, like some others on the carpet, including Modern Family’s Julie Bowen, dangerously showed off her well-toned back. In a slightly less revealing dress but still in a bright, jewel toned color was Jessica Chastain (above right). Her cobalt blue column gown was simple and elegant. She looked fresh and fun, but I would have liked to have seen some great accessories, like a jeweled drop necklace.

Opting for something completely different was the lovely Emma Stone (right) in Alexander McQueen. Her tea length frock was just right, from the sophisticated lace bodice to the flouncy and fun skirt and very high heels. She looks both age- and occasion-appropriate and, because of the risk, is my pick for best dressed.

And now, the winners: (Need a refresher? Here are the nominees.)

Actor, Comedy Series: Alec Baldwin, 30 Rock
I was a little surprised at this; I thought Steve Carrell might win for his final season on The Office, but Baldwin is absolutely hilarious on 30 Rock, and I liked that he rightfully thanked the writers. It’s not what Jack Donaghy would do, but it was the right thing to do.

Actress, Comedy Series: Betty White, Hot in Cleveland
This was a sentimental choice. I won’t begrudge a funny lady from receiving her props, but let’s be real: how many SAG members actually watch Hot in Cleveland?

Ensemble in a Comedy Series: Modern Family
Excellent choice, and excellent speech! Those kids are hysterical and it was a nice change of pace from the endless list of names.

Actor, TV Movie or Mini Series: Paul Giamatti, Too Big to Fail
I have to say that this was a little surprising. I was expecting Guy Pearce to win for his performance in Mildred Pierce. It’s not shocking, but I was surprised nonetheless.

Mary Tyler Moore received the Lifetime Achievement Award. My favorite part was when Dick Van Dyke, upon coming out to present the award, told the crowd to settle down, “I’m just the presenter!”

Actor, Drama Series: Steve Buscemi, Boardwalk Empire
Yay! I was happy about this one. I thought, except for Patrick J. Adams’s nomination, this was the most competitive category, or at least the category that was most difficult to predict. I know actors love Bryan Cranston and Breaking Bad so I thought he’d receive the honor. But I’m glad that Buscemi won, and I loved his line to Michael Pitt fans: “Please stop yelling at me on the street!”

Ensemble in a Drama Series: Boardwalk Empire
Yay!!! Another tight category. I like that Boardwalk Empire won because that show really is an ensemble. Sure, Buscemi is always nominated in the Leading Actor category, but that show is about everyone – it’s about the whole town so I like that the entire ensemble was recognized.

Leading Actor: Jean Dujardin, The Artist
Wow! I was 100% surprised by this. I thought this was a slam dunk for George Clooney. Now, usually I would tell you that the SAG awards are our best predictor for the Oscars. And while they still are a really good predictor, I think Clooney will take home a trophy on Oscar night. The reason SAG awards are a good predictor is because actors make up the largest Academy voting bloc. But they aren’t the only voting bloc. Writers and directors and producers and designers and technicians vote for Oscar winners (not nominations, but winners) and I think Clooney is well-liked and well-respected enough, and that his performance was so well-received by these non-actors that he can most certainly still win Oscar gold next month.

Leading Actress: Viola Davis, The Help
Davis and Meryl Streep keep alternating who wins. And that makes the Oscars so much more interesting. Davis was great in The Help, but everyone loves Ms. Streep. Who do you think will win on Oscar night?

Ensemble in a Movie: The Help
Though I didn’t love the movie, I think this was a good choice. (I think all of the nominees (The Artist, Bridesmaids, The Descendants and Midnight in Paris) were deserving, though.) The Help is a good example of how a cast can elevate a film when they work together. I don’t think this will give The Help the momentum it needs to win Best Picture at the Oscars (especially because the film didn’t receive nominations for writing or directing) but this particular honor is well deserved.

And that’s that. The 18th annual SAG Awards. We’re just a month away from the big night. Take a look at the nominees for the 84th Academy Awards and then tune into ABC on February 26 to find out who wins.