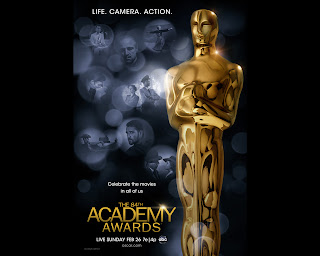 The 84th Academy Award nominations were announced today! And there were actually some surprises. Nothing shocking, of course, but surprises nonetheless. Let's get right to it. (Below is a highlighted list of nominees. Visit oscar.go.com/nominees for the full list.)

Best Picture
This list wasn't so surprising, though we all know it's going to come down to The Artist and The Descendants, with the latter being my pick. I think the surprising thing about this list, particularly given nominations in other categories, is that there is not a tenth film. (With the other nominations it received, I thought Bridesmaids might have gotten a nod here.)

Actor in a Leading Role
I'm surprised and disappointed that Leonardo DiCaprio (J. Edgar) and Michael Fassbender (Shame) weren't nominated. Fassbender received a Golden Globe nomination and DiCaprio received both Golden Globe and SAG nominations. It appears that Bechir (a SAG nominee) and Oldman (supposedly terrific in a film I want to see) took "their slots." I also wish Joseph Gordon-Levitt was nominated for his fearless performance in 50/50. Doesn't make much of a difference since it's Clooney's to lose, but I would have liked for their respective work to be recognized.

Actress in a Leading Role
Absolutely nothing surprising about this category. Of the nominated performances, I've only seen Viola Davis's, but based on buzz, I think we're going to see this come down to Doubt co-stars Davis and Streep, with Globe winner Streep having the edge.

Actor in a Supporting Role
No nomination for Albert Brooks in Drive? That's upsetting. And no Armie Hammer for J. Edgar? That's a little disappointing. Plummer definitely deserves his nomination, though, and all the wins he's racked up thus far. Tune into the SAG awards this Sunday for our most faithful indicator of who will win.

Actress in a Supporting Role
This list is exactly the same as the SAG one, so Sunday night we'll have a clue as to who will win. It's one nominee off from the Globe list, swapping in McCarthy for The Descendants' Shailene Woodley, which is disappointing because Woodley gave a bravura performance and Bridesmaids wasn't very funny.

Cinematography
Okay, so I thought The Tree of Life was a ridiculously self-indulgent film, but it was gorgeous to look at and beautifully shot. Still, I loved Hugo, so I'm rooting for Richardson. (I'm also rooting for Hugo's Dante Ferretti and Francesca Lo Schaivo in the Art Direction category, and Rob Legato, Joss Williams, Ben Grossman and Alex Henning in the Visual Effects category.)

Music (Original Score)
Much as I liked Shore's score, this has to go to Bource for The Artist, right? It was a silent film so the score was a key storyteller. Do the right thing, Academy voters!

Music (Original Song)
This is always a controversial category, in my mind. There can be up to five nominees, and often times, they have less than that because of the convoluted weighting system determining the nominees. Of course I'm thrilled that "Man or Muppet" was nominated, but I also would have liked for "Life's a Happy Song" to get a nod, too. But, at least with "Man or Muppet" receiving a nomination, we can get optimistically excited about a Jason Segel and Muppet performance on the Oscars. Please, Thespis, make this happen!

Adapted Screenplay
No big surprises here. Of course I'm glad that playwright and former political operative Willimon is nominated. For me, it comes down to my dear Aaron Sorkin and company for Moneyball and team The Descendants. Much as I love Sorkin, I wouldn't be disappointed and would actually be glad if Payne, Faxon and Rash won for The Descendants. Let's see what happens when the WGA winners are announced.

Original Screenplay
This is the most surprising category. Again, I didn't like Bridesmaids. I know almost everyone else did, but I'm still surprised to see it receive this nomination. I prefer the Critics Choice nomination list, which included Will Reiser for 50/50 and Tom McCarthy and Joe Tiboni for Win-Win. Even if those writers were nominated, though, I'd still be rooting for Allen for one of his best films in recent years, and my new favorite romantic comedy.
Directing
This is a rich category. For me, it comes down to Payne, Scorsese and Allen. Let's leave out Allen and give him the Original Screenplay award instead. So we're left with Payne and Scorsese. On the one hand, Payne's direction set the tone for the film, striking a careful and powerful balance between farce and tender poignancy. On the other hand, Scorsese directed a beautiful and touching love letter to the medium he loves so much, and used 3D to its greatest effect. It's a close call. Who do you think should win?
And there they are: the nominees for the 84th Academy Awards. Tune into ABC on February 26th to find out who wins!
50/50 aaron sorkin brad pitt Drive George Clooney hugo ides of march Jason Segel Leonardo DiCaprio Martin Scorsese moneyball muppets oscars Shame The Artist The Descendants