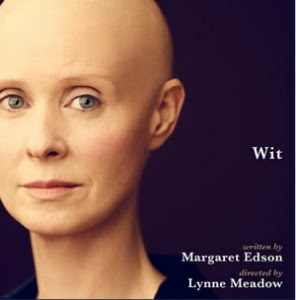 Wit is one of those dense, literary-allusion filled plays that comes off well on stage, and, I imagine, even better on paper. Margaret Edson’s Pulitzer Prize winning play – the only play this Atlanta, Georgia, teacher ever wrote – is debuting on Broadway, courtesy of the Manhattan Theatre Club. Lynne Meadows directs a tight and moving production starring the fearless Cynthia Nixon.

Nixon plays Vivian Bearing, a professor of 17th century poetry (she’s particularly taken with the work of John Donne). It’s 1995 and Bearing has been diagnosed with advanced stage ovarian cancer. Her doctor recommends an aggressive and experimental course of chemotherapy. Throughout the ordeal, this rigid, private scholar has to learn to cede control, open up and, ultimately, find her humanity.

Throughout the play, no matter if Bearing is in present day or playing herself as a five year old (Bearing often breaks the fourth wall and speaks directly to the audience, sort of meta-ly aware that she is performing), she wears her hospital gown and a red baseball cap. At a post performance discussion, one audience member asked why she kept the cap on the whole time. Wouldn’t she take it off during a treatment, this patron asked. I turned to my friend and said, “No. The cap is her cloak. She’s hiding.”

And so she is. Which makes Nixon’s performance all the more powerful. Even though Bearing is hiding, Nixon doesn’t hide anything from the audience. This piece – in performance, especially – lives or dies by the actor portraying Bearing. We’re lucky to have Nixon, who can transition seamlessly from moments of light hearted wit to notes of deeply felt truths. (According to Bearing’s mentor, wit isn’t wit at all; it’s truth.) Though Bearing can come off as brusque and prickly at first, Nixon manages to instantly engage us and elicit empathy. This isn’t just a woman struggling with cancer. This is a woman struggling with human connection.

Wit, and Bearing’s journey, is something almost all of us can relate to, and I was proud to join my fellow audience members and stand up to applaud this moving and intensely intimate drama.

Wit is currently playing a limited run through March 11. Visit witonbroadway.com for more information and to purchase tickets.