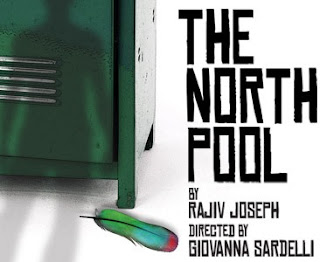 Rajiv Joseph’s The North Pool is a wonderfully written well-made play, a two-hander that is faithful to the classic play conventions of time and location. At just 85 minutes, it plays out over real time in an efficient manner, with not a single unnecessary moment.

Joseph (Bengal Tiger at the Baghdad Zoo, Animals Out of Paper) expertly builds his play, innocuously planting seeds here and there that grow into huge, deep, important plot points as the play progresses. There are twists throughout, but everything is earned. What makes The North Pool an even greater achievement is Joseph’s wordsmith skills. It is becoming rarer and rarer these days to see plays that show just now much a playwright relishes language. Thanks, Joseph, for sharing your likes with us.

From the moment we meet Vice Principal Danielson (Stephen Barker Turner), we think we know him - the VP who’s trying to be the students’ friend. (Costume designer Paloma Young also helps, dressing him in slouchy and wrinkled pleat-front khakis and an unsophisticated tie.) Danielson has brought transfer student Khadim (Babak Tafti) into his office just as school is letting out for spring break. Why the meeting has been convened is a mystery - at first.

Perhaps it’s my liberal blinders, but I thought I had Khadim, or at least the relationship between him and Danielson, all figured out but Joseph mined deeper and, of course, presented something much more complex and therefore interesting.

The North Pool plays out with craft from both actors and restraint from the director, Giovanna Sardelli. (A special shout out to scenic designer Donyale Werle (Peter and the Starcatcher) as well.) For my money, though, the star of the play is Joseph’s writing. It’s sophisticated throughout and weighty without being preachy. And though there is a sort of resolution at the end, it’s ultimately unsettled and unsettling.
drama off-Broadway play Rajiv Joseph