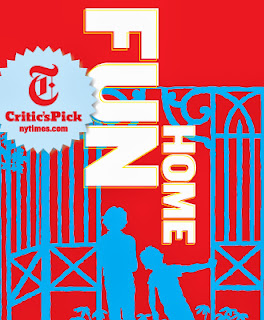 I was late to Fun Home. I don’t mean I arrived late to the Public Theater, where Fun Home is having its world premiere (perish the thought); I mean I saw Fun Home late in its run, once critics and artists had lavished praise on the new Jeanine Tesori-Lisa Kron musical (often in the form of inclusion on best-of-the-year lists). It’s good, but I wouldn’t add to the superlatives.

Based on Alison Bechdel’s book, Fun Home focuses on Alison’s life. We meet three Alisons, noted in the Playbill as Alison (Beth Malone), Medium Alison (Emily Skeggs) and Small Alison (Sydney Lucas). (That would be Alison at about 43, in college and as a kid, 7 or 8 years old.) Alison is a lesbian and a cartoon artist, neither of which ever sat right with her parents, Bruce (Michael Cerveris), and Helen (Judy Kuhn).

Alison’s home is like a museum, much to the delight of her father and chagrin of her mother. Mom is an actress and trying to keep things together for Bruce. Dad is a little bit of everything, including a closeted homosexual and an undertaker. (The family calls the funeral home the “fun home” for short.) He is demanding of his children, especially Alison.

Throughout the intermission-less musical, directed by Sam Gold (The Flick), Alison looks back on her life. She and her father don’t trust memory, but Alison is trying to figure out who she is and where she came from. All along, she tries to find answers to questions she can no longer ask.

Fun Home is interesting and thoroughly engaging. Tesori’s score is effective and well-paired with Kron’s lyrics and book. (A bonus for me: I had a great view of the cellist so I stole looks throughout the show!) I particularly liked the one moment Judy Kuhn got to shine, a song in which Helen essentially disowns her daughter in order to set her free.

Michael Cerveris is sensational as the enigmatic Bruce. He doesn’t let anyone in because for him, like his museum of a house, it’s about the veneer; it’s about the appearance and not the substance. It’s no wonder Alison spends her life looking under the surface and trying to find substance.

What she finds is often heartbreaking. Remembrances of neglect, which she’s only able to see in hindsight, creep up, dispelling images of growing up carefree in a fun home. Even more heartbreaking, though, is once she’s uncovered a memory, she can’t do much to explore it because it’s years later and not everyone is around. And so Alison is left searching…and drawing.