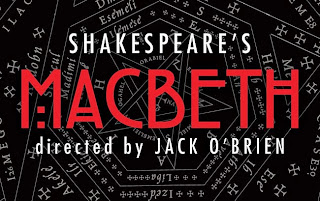 Something wicked this way comes—except those stakes are never quite felt in this somewhat uneven production of Shakespeare’s bloody tragedy, Macbeth. Directed by Jack O’Brien (Catch Me if You Can), there’s a lack of urgency and intensity throughout much of the nearly three-hour play. Unlike last season’s abridged Macbeth (a thoroughly engrossing production that starred Alan Cumming), this is faithful to the text. And while that could be the reason this production of Macbeth drags, especially in the expository scenes, the poor pacing is more likely to due to the direction. (To wit: There’s plenty of exposition in, say, Richard III, currently enjoying a superlative bow courtesy of Mark Rylance and company. Nothing drags in that production, directed by Tim Carroll.)

The good news is there’s a brilliant supporting cast, a winning ensemble uncommon in large productions. We have everyman Brian d’Arcy James as Banquo, one of Macbeth’s trusted compatriots. In small unadorned moments, d’Arcy James (Time Stands Still) is able to present the central question: What does it mean to be a man?

The eccentric John Glover (Death of a Salesman) excels as one of the prophetic witches. He, as well as Byron Jennings and Malcolm Gets, haunt the title character and zealously take pleasure in causing mischief and mayhem. 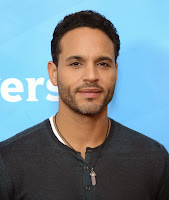 In the pivotal role of Macduff, Daniel Sunjata (Graceland) gives a powerful performance. Coming fully to life in act II, a ferocious intensity takes over Sunjata as Macduff seeks vengeance.

(A (simplified) recap for those unfamiliar with Macbeth’s plot: Set in Scotland, Macbeth is visited by three witches and told that he will become king. He is given assurances about how he’ll die, leaving him feeling untouchable. Macbeth struggles to understand how he might become king, and continues to struggle when his wife, Lady Macbeth, questions his manhood after Macbeth blanches at killing to get ahead. Bloodshed and certifiable craziness ensue as Macbeth seeks to fulfill the witches’ prophecy.)

I’ve always been fascinated by the Macbeth–Lady Macbeth relationship. Though they are presented as two separate people, it’s easy to see them as one being in two bodies. (This was particularly evident in Cumming’s Macbeth.) Here, Catherine Zuber’s costumes, especially their coloring, help to conflate Macbeth and Lady Macbeth.The psycho-sexual aspect of their relationship is further played up in Ethan Hawke and Anne-Marie Duff's portrayal of the pair.

For his part, Hawke (Reality Bites, Before Midnight) was good, though not particularly impressive. It almost seems as if this production happened because movie star Hawke (who, true, is no stranger to the stage) said, “I want to play this part,” and so they put on a show, rather than saying, "the time is ripe for Macbeth. Who’s the best we can get?" He did well in his encounters with Duff’s Lady Macbeth, and brought out a palpable ambivalence in Macbeth’s soliloquies, but there didn’t seem to be anything burning inside of him.

Anne-Marie Duff (who’s played this role in the UK, opposite her husband, James McAvoy, as Macbeth) showed a possessed strength as she goaded Macbeth, and then a tragic fragility as the schizophrenia took over. As one of the few women in the cast (certainly one of the only ones we were meant to pay any attention) Duff was welcomed anytime she was on stage.

Most of the time she was not on stage, though, the production slagged. I suppose an ebb and flow is OK, except that it wasn’t gripping and it should be. Macbeth should be intense and unflinching. It should be manic—this was almost dispassionate at times. Shakespeare’s work asks what it means to be a man, and if bloodlust is ever justified. Those are serious questions, intense questions that deserve intense exploration. Instead, we get flashes of intrigue coloring a mostly bland production of a great play.

They made the curtain call a thing, which is not, in and of itself, problematic (again, see the Twelfth Night/Richard III rep productions), but the very end saw Ethan Hawke taking a final, solo, dramatically-lit bow. It was a bit too much.

Scott Pask’s scenic design is detailed and explained in the Playbill, but it’s not reinforced in the direction. It seems more a feature for show rather than a feature of the show.