The (Curious Case of the) Watson Intelligence 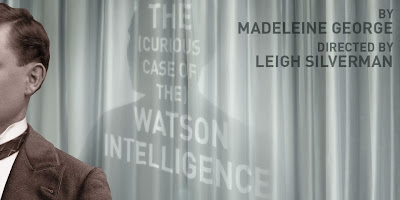 Do people change? Are computers the only things that can learn? These questions and more are explored in Madeleine George’s provocative new play, The (Curious Case of the) Watson Intelligence, being given a wonderful world premiere at Playwrights Horizons.

We begin in 2011, just as the Watson Jeopardy series was wrapping up. (You’ll recall that IBM’s Watson supercomputer competed against Jeopardy’s two winningest champions.) Eliza is interacting with her own Watson, and she is talking to it as if it were her boyfriend. Elsewhere in the 2011 storyline, we meet Merrick, a guy running for city auditor who enlists the help of a Geek Squad-like tech, (Josh) Watson, to investigate his ex-wife. (Josh) Watson ends up becoming romantically involved with Eliza.

Throughout the play, we intermittently visit 1876, the year of the first ever communication by wire, that is, when Alexander Graham Bell placed the first phone call to his partner, Thomas Watson. We later visit 1931, when Watson gave a radio interview about his experience with Bell, and we also venture into the fictional world of Sherlock Holmes where, in 1889 on Baker Street, we meet not Holmes, but Dr. Watson, as well as Merrick the inventor and a mysterious woman named Eliza.

It might sound a little confusing but I assure you that when watching the play you will not be confused but rather completely engrossed in George’s exploration of human intelligence and our relationship with technology. George employs distinct styles for each character and period, but no matter the character or period, the writing is always sharp, thoughtful and incisive. (Scene transitions, in which we see Louisa Thompson’s versatile set change with the aid of mercurial curtains, are underscored by evocative original music composed by Peter Stopschinski.)

Under the skilled direction of Leigh Silverman (The Call), Quaid (Cock), Costabile (Breaking Bad) and Conlee (Murder Ballad) are terrific, playing multiple characters that are very likely different iterations or personifications of the same spirit.

Quaid excels most as 2011 Eliza, who must learn to interact with humans they way she interacts with computers, and must learn not to expect of humans the perfection and dependability she expects of computers. Costabile carries an almost manic energy throughout all of his Merricks, full of verve and vigor, and always carrying on (or bragging) about something. Conlee is wonderfully sensitive as Watson, who, in each iteration, is trying to figure out how to please the people around him.

And that raises the question: Do we really know what we want? How well do we know ourselves, and how well can someone—or something—else know us? The modern storyline is what I think Spike Jonze’s upcoming flick, Her, is going to be about—how we integrate, then rely on, then become completely dependent upon technology. The way we accept artificial intelligence and conflate it with companionship and comfort. Is there overlap there? As Eliza says, connection is the highest form of human intelligence. So what’s artificial anymore?