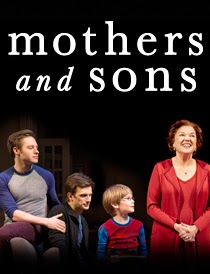 For my final pre-Tonys show, I had the chance to see the bracing new Terrence McNally play Mothers and Sons. Starring Tyne Daly and directed by Sheryl Kaller (Next Fall), Mothers and Sons is a play of our time. 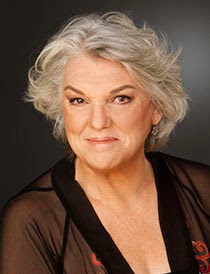 It's reckoning day when Katharine (a terrific Daly) unexpectedly drops by Cal's (Frederick Weller) apartment. They last saw each other 20 years ago at the memorial service for Andre, Katharine's son and Cal's partner. While Cal has mourned Andre, processed his death and found love elsewhere (with his husband, Will (Bobby Steggert (Big Fish, Assistance)), and their son, Bud (Grayson Taylor)), there is still unfinished business between him and Katharine.

The ensuing debates about homosexuality, love and family play out in real time in Cal and Will's spacious NYC apartment. (The detailed set is by John Lee Beatty.) It is ultimately a struggle for all parties to understand one another and to connect on a human level. Katharine begins with a righteous air, coming off as the only one entitled to mourn Andre, who died of AIDS in the early 90s. Cal tries to explain the grief he felt, not only at losing Andre, but also a generation of friends. (Cal recalls the early days of the AIDS crisis, noting, in particular, how no one would help his friends; it's reminiscent of The Normal Heart, which makes the fact that Mothers and Sons is playing at the same theatre as the revival of Larry Kramer's play a significant coincidence.)

In this touching portrait of a new kind of family, McNally takes stock of not just how far we've come as a society with regard to acceptance and equality but also the work that's left to do. A telling moment comes when Cal attempts to tell Katharine to, essentially, get over the "gay thing." He says, "We won everything." Katharine sharply replies, "Not everything. I don't have to approve."
Thought provoking plays like this don't often make it to Broadway, but the conversation needs to continue, so bravo to the producers who shepherded this timely play to Broadway. (Mothers and Sons premiered at the Bucks County Playhouse in June 2013.)