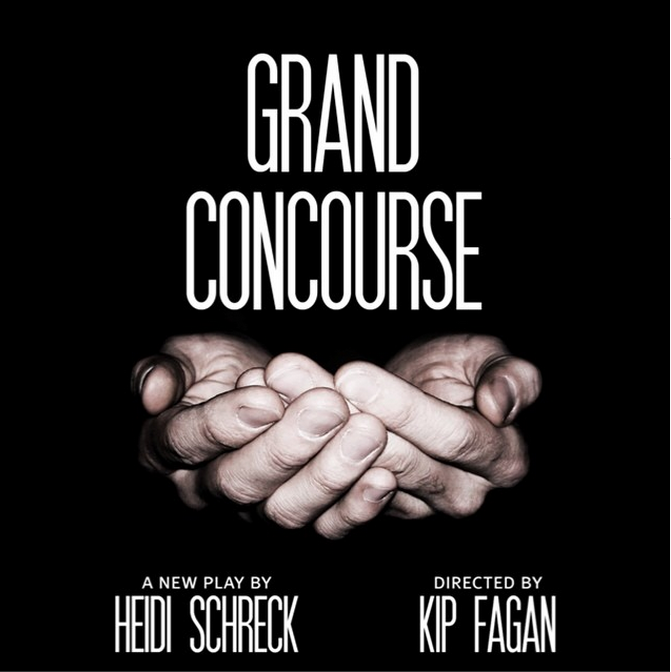 Running or working in a soup kitchen isn't a glamorous way of life, but that doesn't mean it's uninteresting. Actor/playwright Heidi Schreck presents a character study of four people connected by the soup kitchen. (Schreck does not act in Grand Concourse, but I did get to see her a few years ago in Circle Mirror Transformation.)

Said soup kitchen is located in a church in the Bronx, and is more or less run by Sister Shelley (Quincy Tyler Bernstine, who previously appeared at Playwrights Horizons in Mr. Burns: A Post-Electirc Play). Shelley is patient but struggling because she's having trouble praying. Oscar (an appealing Bobby Moreno) is a handy man/security guard/whatever else you need; he's playful but hard working. Frog (Lee Wilkof) is one of the homeless men who counts on the soup kitchen for food and comfort. Their routine is interrupted when Emma (Ismenia Mendes, who appeared in Playwrights Horizons recent Your Mother's Copy of the Kama Sutra) starts to volunteer. Thinking Shelley isn't taking her seriously, Emma blurts out—on her first day—that she has cancer.

Throughout the well–written play, we watch as Emma tries to add value to the soup kitchen, though she acts out in her interactions with Oscar. Shelley continues to find her connection to prayer, even timing herself on the microwave to ensure she prays long enough. The two women are, essentially, on the same journey, trying to do good and fully realize who they want to be. They take drastically different routes, but they're attempting to get to the same place.

The story being told and the characters telling it aren't new, but thanks to the smart script and skilled performances (direction is by Kip Fagan), they are not schlock or after school special, either. Grand Concourse is an engaging, thoughtful play, and shows Schreck's prowess as a writer.
off-Broadway play playwrights horizons