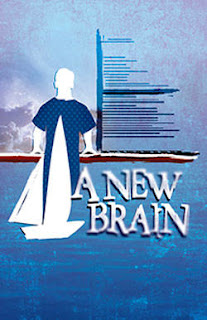 A New Brain is William Finn's deeply personal show about a fledgling composer who discovers there is a problem with his brain. (Finn wrote the show's score; he shares book writing credit with James Lapine.) In the program notes for this Encores! presentation of the show (directed by Lapine), Finn notes that he took some liberties with the details. Finn was not, for example, a struggling composer when he was diagnosed. Still, the emotion Finn packs in is real and honest.

Finn's alter ego is Gordon Michael Schwinn (Jonathan Groff). Schwinn is working on a children's show, writing jingles to pay the bills. When he is admitted to the hospital and learns that the problem is in his brain, he is faced with his own mortality. Surrounded by his mother, Mimi (Ana Gasteyer), boyfriend, Roger (Aaron Lazar), and others, he contemplates what he's doing with his life and how; he thinks about the people around him; and he thinks about what his music means to him. In all, Schwinn/Finn comes to the conclusion that you need not just heart and music, as he originally thought, you need time and music to make a song—to make a life.

I can recognize the pathos; I can sympathize with what happened to Finn and what happens to Schwinn; and I can relate to the struggle of making the most of the brief time we have, but it didn't quite hit me the way other shows have. Knowing that this was a concert presentation, I'm wondering how I would react if this were a regular revival, complete with the full book. Usually the score makes or breaks a show for me, but I realize that sometimes you need the dialogue to help with the pacing, with building the show's emotional arc. That said, I liked the show enough that I'm curious to pick up a copy of the original cast recording an pore over it, truly concentrating on the songs. (Though I was engaged overall, and definitely perked up during some truly hilarious and some truly stirring songs, my mind did wander.)

Truth be told, though, I wouldn't mind having a cast recording of this production. I like watching and listening to Jonathan Groff  (Spring Awakening, Looking) because he always looks like he's having fun—and maybe like he's scheming. It's a playful presence that immediately endears you to whatever character he's playing. Aaron Lazar (The Last Ship) has a strong voice, as does the impressive Rema Webb (Violet), who appears as Lisa, a homeless woman who provides wisdom and solace to both Gordon and Roger. But the real revelation in this production is Ana Gasteyer. The SNL alumna has been building her stage credits since leaving the late night sketch show, but I had never seen her. (Although I did walk in behind her when entering the St James for opening night was American Idiot.) She has a powerful voice, one reminiscent of Kate Baldwin. Pair that with her comedic chops and actor's sensitivity and you have a star performer.

A digression: The wonderful thing about the Encores! series, whether the regular series (which includes Broadway shows) or the Off-Center series (which includes off-Broadway shows) is that it brings to life shows many of the people making up today's theatre audience never got to see. Without commercial burdens, it exposes new generations to shows they might only know through cast recordings (if they're lucky). In practice, this means it's inevitable that many of those at an Encores! concert have elevated the show to cult status (much like I did with tick, tick...BOOM!), having obsessed over it for years. They've built it up over time and when they finally get to see the show, they think it's perfection because they are finally getting to see the show. I understand that, and I appreciate others' passion for the shows they love. My experience with A New Brain was a reminder that not everything is going to be my cup of tea (obviously), and that when I hear the theatre coterie gush over these shows (or any show, really), I need to take their opinion with a grain of salt.
A New Brain Aaron Lazar Ana Gasteyer Encores jonathan groff musical off-Broadway William Finn