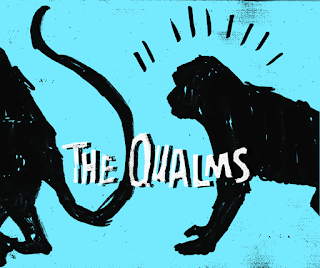 Bruce Norris likes to write characters who stir the pot, and Jeremy Shamos is terrific at playing them. Re-teaming with their Clybourne Park director, Tony winner Pam MacKinnon (Who's Afraid of Virginia Woolf?), they bring us The Qualms, Norris's new play about sexual politics.

Shamos plays Chris, a sort of everyman, he seems like an average, middle-aged white guy. Chris is married to Kristy (Sarah Goldberg), a sweet-looking blonde with alabaster skin, and the newlyweds are at Gary (John Procaccino) and Teri (Kate Arrington (Grace))'s beach condo. The couples met recently while on vacation in Mexico, and Chris and Kristy have decided to accept Gary and Teri's invitation to join their swingers club.

Playing out in real time, the other members of the club begin to arrive: There's Deb (Donna Lynne Champlin), an overweight, average looking woman, and her boyfriend, Ken (Andy Lucien), a black man who is cut like an Adonis and carries himself in an effeminate manner; and Regine (Chinasa Ogbuagu), a curvy, provocative black woman, and her husband, Roger (Noah Emmerich), a white, alpha male who looks like he definitely used to be a frat bro. (Gary, by the way, is a slightly older white man, very mellow; Teri is younger than him, though not inappropriately so, and is the most conventionally hot woman.)

Chris and Kristy are the only newbies of the group. This is their first time engaging in anything like this, and so as they get to know their prospective swing partners, we get to see their (really, Chris's) qualms about sharing and getting out of their comfort zone.

Early in the evening, Regine says that the most important political statement you can make is choosing whom to sleep with. She's not the first to make such a statement. Oscar Wilde famously said that "everything in the world is about sex except sex. Sex is about power." Indeed, that lack of power—that lack of control—is what reveals Chris's qualms.

Was it important that I told you what each swinger looks like? Yes, because our expectations have a significant impact on our reaction to a given situation. Chris and Kristy met Gary and Teri. They knew what they looked like, and both Chris and Kristy were attracted to Teri. The thought of having a sexual encounter with Teri seemed, even to the newly married couple, like an exciting proposition. Presumably, when they were invited to join the swingers club, they thought it would be filled with Teris, and that the men would all be as non-threathening as Gary. When the other swingers show up and burst Chris's bubble, he feels he must regain control.

And so he insists on knowing the rules; he insists on being precise about everything, whether or not it has to do (directly) with sex. (For example, he clarifies that we live in a republic, not a democracy, a common misconception.) But like some of Tony nominee Shamos's other characters (including the ones he played in Clybourne Park), Chris doesn't know when to stop. He continually crosses the line while trying to come to terms with his own sexual proclivities and boundaries. Can he share with others? Can he relinquish control of his body just enough to be open to the possibility of something new? Is it necessarily subversive to want something non-conformist? Does it make him a prude or conservative to not be interested in swinging? (In a Brechtian break of the fourth wall, the cast looks directly out into the audience; it might make some squirm, but hopefully is also makes everyone think about where they fall on the sexual spectrum.)

Jeremy Shamos (The Assembled Parties, Dinner with Friends) is at the top of his game in this meaty role. In the ninety-five minute play, he leaves the stage only momentarily, and he is almost constantly talking. Some of the talk is idle chatter. Some of it is borne of Chris's curiosity. A lot of the talk (and, at some points, the shouting) is Chris taking a stand, realizing he isn't actually comfortable with swinging but he is comfortable with himself. Shamos shines. (Though Sahmos takes most of the glory, I must also single out Donna Lynne Champlin (See Rock City), who is impressive as Deb, a woman who is both emboldened by her sexuality and tender toward the uninitiated.)

I'm glad Tony and Pulitzer Prize winner Bruce Norris wrote this play. It's important that we keep having these conversations. As I'm writing this, the "Call me Caitlyn" issue of Vanity Fair (that's the issue with Caitlyn Jenner on the cover) is resting at my feet. The way we progress as a society is by being ourselves. If yourself is a person who has an XY chromosome yet identifies as a woman, you do you. If yourself is a person who is open to polyamory, that's OK. If yourself is someone who has to have an emotional and spiritual connection to your lover (as Chris proclaims), and therefore swinging isn't for you, that's fine, too. None of those determinations or choices are categorically wrong and none are categorically right. Whatever qualms you have, just make sure you're doing what feels natural to you. That's how you possess power, sexual or otherwise.
Bruce Norris Jeremy Shamos Kate Arrington off-Broadway Pam MacKinnon play playwrights horizons The Qualms