The winners for the 69th Tony Awards have been announced and honored!

I thought hosts Alan Cumming and Kristin Chenoweth were marvelous. (I especially liked Cumming's fake freak outs over Josh Groban.) The broadcast left something to be desired, though, namely all the design and "creative" (rather than performance) categories. It is unacceptable to be honoring excellence on Broadway and not show, in full, acceptance speeches from the people who created the shows—the book and songwriters; the choreographers; the lighting, scenic and costume designers. And the Tony Awards Administration Committee MUST reinstate the Sound Design categories. Finally, all shows that are nominated for Best Musical, Best Revival of a Musical and Best Score should perform, and only those shows.

Without any further ado, here is the full list of winners, with winners in bold typeface and notated with an asterisk. (First the plays, then the musicals.)

Best Play
Hooray! Of course, I would have been delighted had Hand to God won, but Curious Incident simply blew me away. It's an incredible feat, both on the page and on the stage. 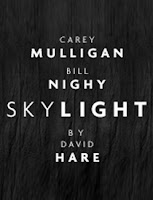 Best Revival of a Play
Clearly, as someone who didn't like Skylight, I am in the minority. In any case, congratulations to the Skylight team.

Best Performance by an Actor in a Leading Role in a Play
Hell yes! Sharp gives a revelatory performance. A star has been born, dear readers. Sharp is just getting started. And I loved that he channeled his character, Christopher, in encouraging young people who are different or misunderstood to persevere because they can do anything. Wonderful.

Best Performance by an Actress in a Leading Role in a Play
This is the one performance in this category I haven't seen, though I'm not at all surprised. If anything was a lock tonight it was this.

Best Performance by an Actor in a Featured Role in a Play
I haven't seen The Audience so I'll leave it at a hearty congratulations to McCabe.

Best Performance by an Actress in a Featured Role in a Play
Ahh!!! I'm so happy for Ashford! She's great in everything, she seems to be such a lovely, effervescent person off stage, and she was absolutely laugh-out-loud hilarious in You Can't Take It With You. (And she'll be back on Broadway this fall.) And I liked that she gave a shout out to her own Sycamore family, who are "weird, silly and love [her] unconditionally." Bravo, Annaleigh!

Best Direction of a Play
Getting Curious Incident right is what I imagine herding cats is like (not because the actors are difficult to work with, but because of all the moving parts). Bravo to Marianne Elliott, who's now a two-time Tony Award winner.

Best Scenic Design of a Play
Right on. Christie and Ross created a veritable playground for the company and it is an integral part of the story and storytelling. Bravo.

Best Costume Design of a Play
I haven't seen Wolf Hall (on stage, that is; I did watch the BBC version starring Mark Rylance), so I'll simply say congratulations to Oram.

Best Lighting Design of a Play
Well, if you've seen this play, you probably would have guessed this, and, like me, you'd be quite pleased with this win.

Best Musical
Of course I'm bummed An American in Paris didn't win. I do like the fact that Fun Home is a small, intimate musical, something that's layered and asks audiences to think. It's not the kind of musical that typically achieves commercial success so for it to win Best Musical is a boon to creativity and tenacity.

Best Revival of a Musical
As much as I enjoyed On the Twentieth Century, this is the right choice. I think it is so easy to do a boring revival of The King and I, and Lincoln Center director Andre Bishop was right to praise director Bartlett Sher's vision. Bravo.
Best Book of a Musical
I was hoping for either Craig Lucas or Terrence McNally, but I'm OK with this.

Best Original Score
I'm so bummed this didn't go to Sting and The Last Ship. This was, without a doubt, my favorite score of the season. I can't stop listening to it. But it appears the odds were in Fun Home's favor. And, history was made because this was the first time an all-female songwriting team won this award. (Wouldn't it have been nice if Tesori and Kron's acceptance speech had been televised in full?)

Best Performance by an Actor in a Leading Role in a Musical
You know I was rooting for my dear Robbie Fairchild, but Cerveris is giving a truly affecting performance, and, to boot, his speech was heartfelt and thoughtful. Congratulations.

Best Performance by an Actress in a Leading Role in a Musical
I am overjoyed that the inimitable Kelli O'Hara is now a Tony Award WINNER! She's wonderful to watch and I couldn't be happier. Lovely.

Best Performance by an Actor in a Featured Role in a Musical
Lame. Borle seems to be doing some variation on Black Stache, his character in Peter and the Starcatcher, for which he won a Tony a few years ago. I was rooting for Max von Essen, and was sincerely disappointed when he didn't win. Bummer.

Best Performance by an Actress in a Featured Role in a Musical
Holy Thespis, I'm soooooooo excited about this win. Miles is terrific in The King and I, and her speech was thoughtful, funny and sincere. Bravo to the incredible Miles, who's just getting started.

Best Direction of a Musical
As much as I love An American in Paris, as a fan of Gold's work for several years now, I'm pleased as punch to see this hip theatre director break big. Way to go, Gold.

Best Orchestrations
If you haven't seen An American in Paris or listened to the cast album (now available), you don't know what you're missing. These orchestrations bring new life to already beautiful songs. C'est magnifique!

Best Scenic Design of a Musical
Merde! Also, remember that 59 Productions is responsible for the projections, which help us see Paris through Jerry Mulligan's eyes. Bravo.

Best Costume Design of a Musical
I mean, did you see the huge skirt on Kelli O'Hara's dress when she was dancing "Shall We Dance"? Congratulations, Ms. Zuber.

Best Lighting Design of a Musical
Bravo! Another well-deserved award for this glorious musical.
Special Tony Awards
And there you have it: The winners of the 69th Tony Awards. Browse through my Tony Pinterest board and my Culturalist profile for more Tony fun. Visit tonyawards.com for more information.