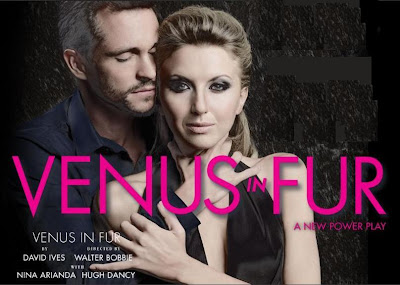 “There can be nothing more sensuous than pain or more pleasurable than degradation.” At so it goes in this deliciously seductive power play.

David Ives’s Venus in Fur is an adaptation of the eponymous German novel, penned by Leopold von Sacher-Masoch, the namesake of the term “masochism.” The term was coined and fashioned, actually, after the actions in Sacher-Masoch’s Venus in Fur, and sexual politics and their inherent power struggle are further explored in this new play.

Ives (who was recently represented off-Broadway with The School for Lies) structures the play using an old musical theatre device: a show within a show. In Ives’s Venus in Fur, Thomas (Hugh Dancy) is a playwright who has adapted Sacher-Masoch’s Venus in Fur. Thomas keeps his adaptation set in the 1870s. Ives’s characters are interacting in present day. When we meet Thomas, he is exasperated after a day spent trying to find the right actress to play Vanda Dunayev, the pivotal goddess/temptress of Sacher-Masoch’s book and Thomas’s play. With lightning and thunder abounding, in walks Vanda Jordan (Nina Arianda), a seemingly flighty, inarticulate actress. Oh, how wrong first impressions can be.

For the rest of the play, Thomas and Vanda debate power within a relationship (a man's vs. a woman's, sexual and otherwise), with many of the debates being sparked by the excerpts they are reading from Thomas’s play. (There are also moments in which the power struggle, and a person’s propensity toward masochistic behavior, is analogous to a life in the theatre.) In this complex and provocative play, which asserts that, “In love as in politics, one partner must rule,” power is mercurial, exposing a maddening elusiveness in the intangible thing we all want to grab hold of.

Breathing incredible, passionate and messy life into Thomas and Vanda are Hugh Dancy and Nina Arianda, respectively. Under Walter Bobbie’s skillful and careful direction, both are excellent.

Dancy is no stranger to the stage (or to an American accent), and here, he doesn’t miss a beat. As the power shifts, so do Thomas’s moods, though thanks to Dancy’s fine acting, nothing feels false. I particularly loved a moment in the middle of this brisk 90-minute play: Dancy sinks in and tries to disappear into the divan as Vanda analyzes him. It’s a Sisyphean effort, of course. In that moment, Vanda has the power and he is paralyzed, but his emotions are running at full speed.

When Venus in Fur ran off-Broadway last season at Classic Stage Company, Nina Arianda received rave reviews. I didn’t get to see that production, so going into this, I was a little skeptical of the hype. However, after about, oh, one minute, I had officially hopped aboard the Nina Arianda bandwagon. It’s difficult to describe just what is so spectacular about Arianda’s performance, and I think that actually makes it all the more spectacular. I do not see the effort. She seamlessly disappears into the role and becomes Vanda. She is a goddess and a temptress. She is fierce. She is fearless. She is headed toward amazing heights.

The execution of this play is nearly flawless. John Lee Beatty’s scenic design is simple and constrictive, which is just right for this play. The subtle lighting cues of Peter Kaczorowski gently enhance the power ebb and flow. While Walter Bobbie’s direction was very good, I wish the end hadn’t felt so rushed. I would have preferred for the ending tableau to linger for just a moment longer, to let the ending sink in. But if my only complaint about the play is that it was over too quickly, then it’s a damn good play!

And it is. Venus in Fur is complex, provocative, sexy, smart and powerful. In short, it’s everything a great piece of art should be.

Venus in Fur is presented by the Manhattan Theatre Club, and the limited run production plays at the Biltmore Theatre on 47th street through December 18. Visit mtc-nyc.org for more information and for tickets. (Under 30? Join MTC’s 30Under30 program and pick up tickets for Venus in Fur for just $30.)