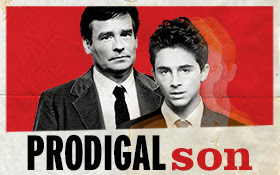 I keep trying to write this review of John Patrick Shanley's new and personal work, Prodigal Son. I just can't get authentically passionate about anything in the play.

Prodigal Son takes place at the Thomas More Prep School in New Hampshire; Bronx boy Shanley attended Thomas More as an adolescent. This play is his portrait of the artist as a young man. It's well-written (as you might expect from the author of Doubt), though Shanley's directing could use some work; and it's mostly well-acted (the cast includes Robert Sean Leonard, and I'll let you draw your own conclusions about the irony of the Dead Poets Society star playing a teacher at a boys' prep school). Like in Arcadia, there are notions of picking up the breadcrumbs the greats have left behind. And the central tension lies is Shanley's stand-in, Jim (Timothee Chalamet), struggling to square the possibly opposing forces of free will and destiny.

To me, that is. The performance I attended had some special guests in the audience: A group of Thomas More alumni (including some of Shanley's classmates) and their families. It was fascinating to hear them react to certain details and moments throughout the play, and even more fascinating to hear what they had to say to Shanley during a post-show discussion with the playwright. I can see and appreciate how Prodigal Son meant something to them; it felt real and cathartic. It just didn't mean much to me. I'm looking for a mind at work, yes, but also something fresh, a story I haven't heard before.
John Patrick Shanley MTC off-Broadway play Robert Sean Leonard