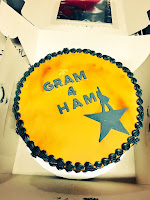 Marin Mazzie Sets Broadway Return
The great Marin Mazzie (Zorba!, Next to Normal) will assume the role of Anna in the Tony-winning production of The King and I beginning May 3. Tony winner Kelli O'Hara will play her final performance on April 17. (Standby Analisa Leaming will play Anna in the interim.) Broadway.com has more.

"Every Minute Counts on the Way to Opening Night"
The New York Times spent the day with several productions set to open on Broadway this spring. Spending an hour with each of a dozen shows—Bright Star, Nerds, The Father, Hughie, Shuffle Along..., American Psycho, Waitress, She Loves Me, Eclipsed, Tuck Everlasting, Fully Committed, and Disaster—from 9am to 6pm, various reporters let readers in on the process of mounting a show, from pre-rehearsal workshops to costume fittings; from load-ins to the first preview—it's a fascinating look behind the scenes, and offers fans a chance to meet more of the people who help bring these shows to life.