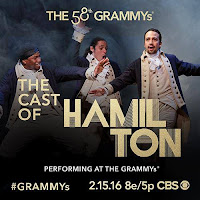 Hamilton News
So, this (→) is happening. The cast of Hamilton will perform on the Grammys. It is not unprecedented for Broadway to be featured on the Grammys. (You might recall, in fact, that the cast of American Idiot performed "21 Guns" will Green Day during the 2010 Grammys, just a month before Broadway previews began.) What's different about this appearance, though, is that the cast will be performing live, via satellite, from the Richard Rodgers Theatre. USA Today has a video of the cast announcing the appearance, as well as statements from the show's producers and its creator and star, Lin-Manuel Miranda. Tune into the Grammys on Monday, February 15, on CBS. In other Hamilton news: The national tour will make a stop in Atlanta during the 2017-2018 season. Broadwayworld.com has details. 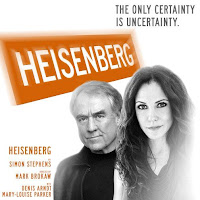 Heisenberg Coming to Broadway
Heisenberg, which premiered off-Broadway this summer, will arrive on Broadway this fall. Mary-Louise Parker and Denis Arndt will reprise their roles in this Simon Stephens play, and Mark Brokaw will, once again, direct. (Stephens will then have two productions on Broadway, the other being the Tony-winning The Curious Incident of the Dog in the Night-Time, which is running at the Barrymore, on 47th Street. Because Heisenberg is an MTC production, the two plays will be neighbors, as MTC's Broadway house, the Friedman, is located next to the Barrymore.)  Previews for Heisenberg begin September 20, with opening night scheduled for October 13. Broadway.com has more.

Encores! Off-Center
The New York City Center Encores! Off-Center 2016 lineup has been announced. Off-Center presents under-produced off-Broadway musicals for one-weekend-only runs. This year's season will begin with Runaways, the Elizabeth Swados musical. Catch that July 6-9. Next will be a one-night-only concert featuring Sutton Foster (Violet) and Jonathan Groff (Hamilton). Off-Center artistic director Jeanine Tesori (Fun Home) will be at the piano for the July 16 concert. Bringing the brief season to a close from July 27-30 will be God Bless You, Mr. Rosewater, the musical adaptation of the Kurt Vonnegut novel. Stage and screen favorites Santino Fontana (Act One) and Skylar Astin (original Spring Awakening, Pitch Perfect) will star in the Howard Ashman–Alan Menken musical. Tickets go on sale to City Center members on February 8; the general on-sale date is February 22. Playbill has more.

Justin Peck's The Most Incredible Thing
Visit the Lincoln Center blog for an interview with NYCB soloist and resident choreographer, Justin Peck, whose The Most Incredible Thing, his first narrative piece, premiered this week. Meanwhile, W magazine has an exclusive first look at the theatrical costumes, designed by Marcel Dzama, and New York Times photographer Andrea Mohin has rehearsal and production shots on her Instagram feed.