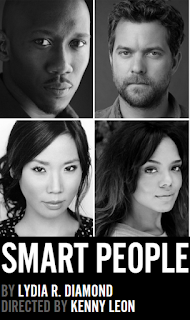 In the Pulitzer Prize winning Ayad Akhtar play Disgraced, adults of different ethnic and religious backgrounds talk about race and racism, with most of them thinking they are so evolved and post-racial. In Lydia R. Diamond's new work, Smart People, we are met with a similar premise but with different results.

The titular smart people are Jackson (Mahershala Ali), an African-American doctor in his residency; Brian (Joshua Jackson), a white neuroscience researcher who speaks out against racism; Ginny (Anne Son), an Asian-American psychiatrist studying the Asian-American female experience; and Valerie (a captivating and natural Tessa Thompson), an African-American actress. At rise (Cambridge, MA, circa 2007-2009), Jackson and Brian know each other, but all the other connections will be made throughout the course of the play. (A gripe: we see too little of the development of the relationship between the two women.)

Their experiences—both professional and personal—are the storytelling devices that allow them to have these conversations about their racial experiences and prejudices. They all bring up various racially-specific experiences, including the two black people going in on each other over who's "blacker" or "black enough." These kinds of discussions are nothing new (in life or on stage).

Which is why, contrary to what I thought at the beginning of the play, it matters that Smart People takes place pre-President Obama. I thought, "Why does this need to be taking place in 2007-2009? Other than the references to Obama's candidacy, there's nothing about this that doesn't feel current." But then I thought some more. Racism didn't end at 12:01 on January 20, 2009. In fact, President Obama's time in office has brought a lot of racism and the ensuing vitriol to the forefront. And perhaps that's the point of setting Smart People in the months leading up to his presidency: To show that tough we have a black president, we still need to have these conversations. Yes, culturally speaking, the president has a profound impact on young black children and others, and the fact that he was elected is progress, but not enough progress has been made.

Still, I was finding the well-written Smart People, directed by Tony winner Kenny Leon (A Raisin in the Sun, Holler If Ya Hear Me), to be a little trite. I don't mean to dismiss the characters' points of view or Ms. Diamond's voice; I mean that the conversations sounded like ones I'd heard before. I was eager for a fresh perspective. Toward the end of the play, I got it.

A dinner scene finds all four smart people together for the first time. Brian and Jackson get into an argument about race. Valerie chimes in now and then but Ginny does not. When Jackson addresses a question to her, she balks, "Was I part of this conversation?" She elaborates: "I'm going to stay over here with the Native Americans and Latinos and Arabs. When you talk about race, it really is just black and white."

And that's the fresh perspective I was looking for. It's a small moment, but a telling one. Of course the conversations about race have to continue. Of course slavery is America's original sin but White America demoralizing and institutionally suppressing an entire population isn't limited to African-Americans. We hear scary rhetoric from people running in this presidential election (another reason to set Smart People in 2008; juxtapose one presidential race with another), talking about banning all Muslims; talking about deporting Mexicans; talking about making America great again, taking the country back (from whom and to where?). Difficult as they may be, smart people know that we need to keep having these conversations, and they need to include everyone.
Anne Son Joshua Jackson Kenny Leon Lydia R. Diamond Mahershala Ali off-Broadway play Second Stage Smart People Tessa Thompson