How to Succeed in (the Theatre) Business Without Really Trying:

Chapter One – Choose a Musical Revival
Musicals are more popular than plays, and revivals, no matter how irrelevant they may be to the present or how ill-adored they are, are a “brand” name, a recognizable commodity. This means tourists, who are the majority of theatre goers, are more apt to see it. They know it so they figure it must be good. (This is why the terribly boring Phantom is still running.)

This revival of How to Succeed in Business without Really Trying (music and lyrics by Frank Loesser; book by Abe Burrows, Jack Weinstock and Willie Gilbert) is being presented, ostensibly, because this year represents the 50th anniversary of the show. (The plot of How to Succeed is fairly simple: Finch attempts to climb the corporate ladder, aided by a book baring the same title as the musical. (When Finch reads from the book, the recorded voiceover comes courtesy of newsman Anderson Cooper. In the original production, the voiceover came courtesy of newsman Walter Cronkite.) Finch follows the book’s advice and starts climbing.) I suppose that’s a decent enough reason but it’s not a particularly compelling one. Usually, I like revivals to either be too much fun that it seems unthinkable it wouldn’t be revived, or for there to be relevancy to today. Hair satisfied both those criteria. It was uncanny how relevant it was when it premiered in the park in summer 2008 and still when it transferred to Broadway two years ago in March 2009. But Hair closed in the summer of 2010, when it was no longer relevant. (See my Peace Out; Rage and Love In post for an explanation.) And it was also a world of fun and it was captivatingly emotional. (See: dance party on stage)

Unfortunately, for my taste, this revival of How to Succeed doesn’t meet either of those criteria. It’s never been one of my favorite shows (I cannot comprehend how it won the Pulitzer), and this production did nothing to sway me. This show, which just opened, is totally flat. Nothing popped; the actors didn’t seem to perform with much gusto; it’s a lackluster experience. So this show, or more specifically, this production, wasn’t fun enough to just be fun. And while I suppose you could stretch and say Finch’s rise in the World Wide Wicket Company is relevant to today’s corporate mess, in which it seems thoroughly incompetent people are heading businesses without understanding. But I think that’s a far stretch. And so it is that I find myself asking why this is being revived at all, let alone now.

Chapter Two – Fill Your Stage with Lots of Bright Colors
In the sets, in the costumes, everywhere, add tons of flash to help distract from the less than stellar everything else. (“Give ‘em the old razzle dazzle…”) The scenic (Derek McLane) and lighting (Howell Binkley) designs are interesting. I actually liked the pod-like nature of the set. When the scrim rose, we saw the workers in the “pods” throughout the structure. It was like they were saying, “These workers are pod people, not really sentient beings, just going through the motions to get through the day.” (A somewhat similar sentiment is implied in the song, “Company Way.”) The lights kept changing, making the colorful set complement the colorful and bright costumes, designed by Catherine Zuber. For most of the show, each of the secretaries was dressed in one color palette. Smitty (Mary Faber) was in turquoise blues; Rosemary (Rose Hemingway) was always in pink. The design is commendable, but it doesn’t quite make up for the show’s other deficiencies.

Chapter Three – Cast a Movie Star in the Lead Role
Regardless of his or her “rightness” for the part; regardless of there being a more talented but hardly known actor ready, willing and more than able to play the role; and regardless of said movie star’s talent, tourists like to see movie stars on stage. Cast one and you’re almost always golden. (Note: A well liked TV star may suffice. See: Kelsey Grammer in La Cage aux Fail.)

Now, dear readers, sometimes a movie star or other known talent comes in to a production and is really good. (Word on the street (and not just from Tony voters) last season was that Scarlett Johansson, in her Broadway debut, was very good in A View from the Bridge.) If the actor does a great job, I have no problem with his/her appearance. Yes, it may take away an opportunity for some unknown (or less widely known) actor, but I understand the economics of theatre – especially Broadway – these days and I know producers need to sell tickets.

But Daniel Radcliffe, in the lead role of J. Pierrepont Finch wasn’t really good. He was serviceable, but off the top of my head, I can think of five actors – who aren’t as well known – who could do a better job: Nick Blaemire; Matt Doyle; Jonathan Groff; Jay Armstrong Johnson; and Kyle Dean Massey. (I’ll bet you can think of more!) Radcliffe has a fine voice, but it’s clear he doesn’t know how to use it for eight shows a week. By the time the curtain rang down last night, he already sounded like he was straining. I thought he spoke way too fast; my friend, who accompanied me, said he thought everyone spoke very fast, so maybe it was a directing choice. (This production is directed and choreographed by Rob Ashford.)

Radcliffe’s acting was fine; I liked that cheeky grin he threw out to the audience each time Finch got an idea. (And he also spoke with a near flawless American accent.) He didn’t have any charisma, though. I could take my eyes off of him. Moreover, he just seemed too young for the role. He looked like he was 18 and starring in his high school’s production. (That’s not a dig on the production value, just on the actor’s youthful appearance.) My friend said he was having trouble separating Radcliffe and Finch from Harry Potter; that each time Radcliffe would start to sing, he’d picture the actor as the famous wizard. Having never seen a Harry Potter movie, I didn’t have this problem. I will give Radcliffe credit for his dance moves. He didn’t have much flair but he executed Ashford’s athletic choreography with skill. So at least there’s that.

Daniel Radcliffe wasn’t alone on stage, though, and despite low energy, most of the supporting cast was good. Mary Faber, who originated the role of Heather in American Idiot, takes a fresh, comedic turn as Smitty. She puts on a character voice and makes all sorts of funny faces, especially when she’s battling Christopher J. Hanke’s Bud Frump during “Coffee Break.”

As the bratty Frump, who has succeeded in business thanks to nepotism, Hanke is funny and smug – the kind of dude you just want to punch in the face. (The character, not the actor!) The only disappointment with Hanke’s performance is that it was similar to his performance as Baldwin in Crybaby. The characters were similar so it makes sense that the performances were, but I’d really like to see him do something different. I’m sorry I never got the chance to see him take over as Claude in the Shakespeare in the Park production of Hair in 2008. Claude is nothing like Frump or Baldwin, and I’m curious to know what Hanke did with the role. (Dear readers, did you see his performance? How was he?)

I didn’t care for Tammy Blanchard’s interpretation of Hedy LaRue. It was too much Lucille Ball, not enough Betty Boop. There was a lot of mugging going on and it didn’t work for me. I see Hedy as more of a bombshell, and here she was some rubber-faced caricature. Since he, too, thought of Hedy as a sex kitten, my friend liked seeing the unexpected and was actually pleasantly surprised with Blanchard’s interpretation. I was just surprised.

Chapter Four – Watch the Box Office Explode
Despite tepid-to-bad reviews, this is bound to do well at the box office because of chapters one through three. I don’t think it will win best revival at the Tony awards; that honor likely will (and should) go to Anything Goes, but that won’t stop tourists from coming to see Harry Potter on Broadway. 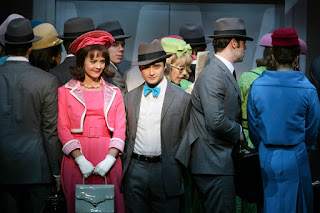