Catch Me While You Can 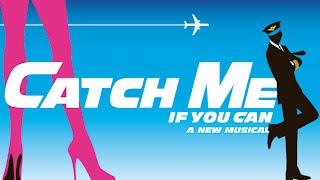 Last week, I was fortunate to see Catch Me if You Can for the fifth time! The first time I saw the show I found it to be fun and thoroughly entertaining, with an all-star cast. (…And by all-star I don’t mean celebrities; I mean a top-notch cast, the best of the best.) And let me tell you, dear readers, it is even more fun and entertaining each and every time I see it.

Catch Me is vibrant and exciting. The songs are lush – this is now one of my favorite cast recordings. To wit: “Goodbye,” the show’s penultimate number, is now number three in my iTunes top played list. The two songs above it are at least five years old. “Goodbye” is a quick climber! And more than anything else, the incredible, passionate and masterful vocal performances in the show and on the recording are astonishing.

(The first time I saw the show, I thought the score was just good; after listening to the recording nearly non-stop and seeing the show several times, I realize that the first time was a fluke – there were so many wonderful stimuli vying for my attention that I couldn’t focus on how great the score is. I now know it’s incredible, and I think that my neighbors probably know, too… because I play the recording so frequently!)

Back in early 2009 (right before Hair came to Broadway), I attended the Defying Inequality benefit, which included performances from Broadway shows and composers. Toward the end of the night, petite Kerry Butler walked out on stage, opened her mouth and started singing “Fly, Fly Away.” I cried for four minutes straight. (Catch Me was in a pre-Seattle try out, developmental stage at that point.) It was (and remains) one of the most beautiful, moving songs I’ve experienced. And now every time I see Catch Me, I pull out my tissues before Kerry “The Petite Powerhouse” Butler starts singing because it still gives me the most excellent chills.

Moreover, Aaron Tveit soars in Catch Me, no where more than in “Goodbye.” (This is why it’s moved to the top of my top-played list!) When he starts singing this song, it stirs all sorts of wonderful feelings in me. The gestalt of “Goodbye” excites me on many levels. As a woman, I can’t help but be charmed and delighted by Aaron’s charisma, prowess and magnetic stage presence. As a theatre goer, I absolutely thrill over his virtuosic performance; Aaron (inarguably) has the best voice and vocal technique among his peers. (And, dear readers, you know I am enamored of John Gallagher, Jr.’s talents, but when it comes to pure vocal performance ability, Aaron takes the cake.) And, finally, as a theatrical scholar I love how the song is enhanced by various design elements that are most powerful in a theatre. Were similar techniques used on film, the moment would be good, but not as grand and evocative as on stage. As Aaron launches into the end of the song, “…the final word/the last you’ll hear of me/of me/is goodbye…,” what was a blank stage opens up to reveal color, lights and a terrific live orchestra. It’s in moments like that I’m happily reminded of the power of the theatre. It absolutely takes my breath away.

But, my dear readers, I think the element of Catch Me that makes me happiest is the palpable chemistry among the cast. I love nothing more than to watch people do something they love with people they love. That’s what happens at each and every performance of Catch Me if You Can. The father-son scenes between Tom Wopat and Aaron are poignant and touching because the two terrific talents have clearly developed a bond. And, when, during “Strange But True,” Aaron and Norbert Leo Butz tease each other with their spotlight-seeking one-upmanship, a big huge smile comes across my face.

The exquisite ensemble gets in on the fun, too. I hereby declare that before any chorus girl is allowed on stage, she must be given a master class by Catch Me’s favorite gypsy, Rachelle Rak. She is one awesomely sassy lady! I adore the fact that, like Rak, each ensemble member has his/her own attitude and looks like they’re having fun. In another musical, it’s said that “you’re never fully dressed without a smile.” While some of the ensemble member may be dressed in very little (men, take note: sexy stewardesses and naughty nurses abound), taking Rak’s lead, they are all most certainly fully dressed.

And they’re not the only ones smiling. Throughout the show, I’m smiling and laughing, to the point where my cheeks hurt by the time the curtain rings down! But it’s a wonderful hurt. No matter what is going on in your life at any given moment, it’s thrilling to know there are still safe places to go, places in which you can experience joy and wonderment, and watch experts at play. Right now, that place is Catch Me’s home, the Neil Simon theatre.

Catch Me is, unfortunately, taking its final Broadway bow on September 4 (I’ll be there!), but it’s heading out on the road for its first national tour in fall 2012. I highly recommend you see Catch Me on Broadway while you can and on tour thereafter. Theatre fans will quickly cotton to the score (the cast recording is phenomenal, including the bonus track, “Fifty Checks”) and appreciate the anachronistic show-within-a-show storytelling device. Those who generously accompany their theatre fan family and friends will also find plenty to adore, in addition to the score. Everyone will be able to sympathize with our notorious guide and, in particular, men will likely enjoy ogling the bevy of stunning female ensemble players, those jet-setting glamazons! 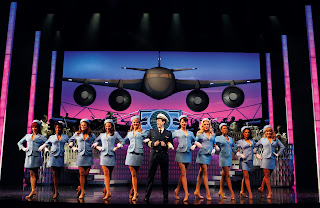 Read my review of an early Broadway preview of Catch Me if You Can.

Production stills provided by the Catch Me if You Can team.

aaron tveit Broadway catch me if you can musical