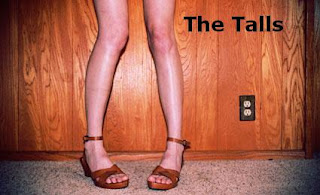 The Talls, centering on the Clarke family dynamic, could be a television series. There are a lot of relationships and growth to explore, so much so that some of it felt a little crammed into this 80-minute new play by Anna Kerrigan. Still, it was intriguing and engaging, and I would, indeed, be interested in spending half an hour or an hour each week with the Clarke family.

(Or maybe it could work as a longer play or film. It reminded me a little bit of The Ice Storm. That movie, of course, was well beyond 80 minutes, and the extended running time contributed positively to my consummate enjoyment. Both The Ice Storm and The Talls are set in suburban America in the 1970s.)

Making up the Clarke family are mom and dad Anne and John (Christa Scott-Reed and Peter Rini, respectively) and their children (in ascending age order), Nicholas (Timothee Chalamet), Catherine (Lauren Holmes), Christian (Michael Oberholtzer) and Isabelle (Shannon Esper). When we meet the Clarkes, we learn that John is running for city comptroller, and college student Russell James (Gerard Canonico) is running his campaign. Russell is supposed to come over to the Clarkes’ home to meet the family and talk strategy, but an emergency involving a family friend sends all the Clarkes—except Isabelle—to the hospital, leaving her and Russell alone.

While Kerrigan tried to depict other relationships (more on that later), Isabelle’s coming of age was the main focus, and her interactions with Russell primarily shape her transformation. At rise, Isabelle is 17, finishing up her senior year before heading from Oakland to Providence (she’ll be attending Brown) and she thinks she’s a liberated woman who knows everything. It’s not until she meets Russell, just a few years her senior, mind you, that she gets a bit of a life lesson. He shows her that while she may not be following in her mother’s footsteps and is progressive, she is still myopic in her worldview. He reassures her it’s okay, though, saying, “You’re 17; you’re not supposed to know everything.”

This comes as a revelation to Isabelle, who is in a family of overachievers (read: The Talls), and has probably never felt good enough, despite her impressive resume and valiant effort.

I’m glad Isabelle came around to this revelation because about 2/3 of the way through, though I was enjoying it, I started wondering where we were heading. I started asking my typical question, “What’s the point?” Thankfully, the play’s conclusion satisfactorily answered my inquiry, depicting palpable purpose and meaning to the last 75 minutes.

One part of watching The Talls that I particularly relished was watching Gerard Canonico get a chance to shine. Gerard was in the original Broadway companies of both Spring Awakening and American Idiot. In the former, he began as an ensemble member (he sat in street clothes in an on-stage seat), and understudied John Gallagher, Jr’s Moritz. He eventually went on to play Moritz in the final cast, but only for a couple of months. (I saw him perform the role just once, on closing night.) In American Idiot, he was a featured ensemble member, and while he was great in his role, the show didn’t afford him the opportunity to show off his acting chops. As Russell, Gerard personified a smarmy but somehow engaging charisma that bordered precariously on arrogant, but thankfully never crossed the line.

All of the actors were impressive, not just Gerard. Shannon Esper’s transition from strong woman to vulnerable late teen felt natural. Christa Scott-Reed’s stepford wife on the verge of a nervous breakdown was solid, and I liked Michael Oberholtzer (who looks like Ryan Philippe) as a jerkish but ultimately protective big brother.

Getting back to the crammed aspect of The Talls: The dynamic between Isabelle and Russell is really the central connection, although Kerrigan does try to explore the complicated sibling love-hate relationship of Catherine and Christian, as well as unrecognized feelings within the mother and the mother-daughter relationship. (Actually, the only character that was grossly unexplored was John, the dad. I felt he got short shrift; if Kerrigan returns to and expands this work, I would hope that John is developed a little more.) This probably sounds like a lot to tackle in 80 minutes, and it is, but the writing is good (as is the direction by Carolyn Cantor), so maybe NBC might consider adding it to its primetime lineup. (My suggestion: Bump off some horrid reality TV to show a family dealing with their (scripted) reality on TV.)

For more information about The Talls, visit 2st.com.