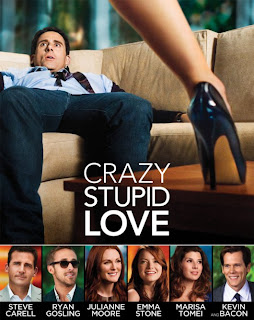 Crazy, Stupid, Love is neither crazy nor stupid, though it is rather lovely. In this new ensemble film, teens, young adults and “grown ups” traverse rocky relationship terrain, and thanks to an intelligent script and a terrific cast, you’ll be glad to join them for the journey.

We meet Cal (Steve Carell) and Emily (Julianne Moore) on the night Emily asks Cal for a divorce. (Turns out, Emily had an affair with David Linghagen (Kevin Bacon).) Looking to numb the pain, Cal heads to a bar where he meets Jacob (Ryan Gosling). Jacob is a smooth operator (though when we first meet him we see him striking out with Hannah, played by Emma Stone). Jacob insists on taking Cal under his wing and reintroducing him to the dating world. All the while Cal and Emily’s son, Robbie (Jonah Bobo) is dealing with his first love, unrequited, naturally, and Hannah considers settling, not for Jacob but for a milquetoast guy just because he’s there.

When they’re done well, I happen to thoroughly enjoy ensemble pieces like this, films in which seemingly disparate characters are actually tied together. And one of the reasons I happed to enjoy such films so much is because it really is an ensemble piece – no one gets all the glory and so each character needs to be brought to life a talented actor, not just a pretty face.

See, the challenge in an ensemble film is that in order to tell everyone’s story, we don’t get to focus on any one character for too long; I’ve seen plenty of movies and plays in which the author is trying to tell too many stories and so we never get a full picture of any one character. Fortunately, not only has screenwriter Dan Fogelman written a smart and sharp script, but his actors are skilled enough that they can present fully fleshed out characters in a short amount of time. (Crazy, Stupid, Love is directed by Glenn Ficarra and John Requa.) 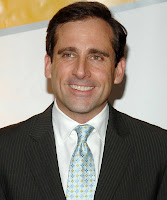 In particular, I was very impressed and pleased with Steve Carell’s performance. Carell is mostly known for his over-the-top schtick and zany antics, typified by his role on The Office. And when he was in Little Miss Sunshine, his character was rather one-note morose. It worked for that film, but it wouldn’t have been right here. So I was pleasantly surprised by his layered performance. He wasn’t some nutty, off-the-wall guy; he wasn’t a totally sullen wallflower; he was a dynamic character who was dealing with a life crisis.

Of course, I also really enjoyed Ryan Gosling. (You know, dear readers, that Gosling is starring in the upcoming film adaptation of Beau Willimon’s play, Farragut North. Now called The Ides of March, the film is directed by George Clooney and set for release on October 7th, the most wonderful day of the year!) I’ve been a fan of his for a long time, ever since I saw him in The Believer. (He was also stellar in Blue Valentine.) Here, he seemed to relish the chance to play slick womanizer Jacob, reminding me of some “playas” I’ve seen out and about. But Gosling has a tendency to bring subtle touches to his roles, marking character changes in soft, simple ways, and so when he meets a game-changing woman, the change in Jacob’s character is totally believable.

And I must say how much I like Emma Stone. She’s young (yet mercifully poised and mature) and talented and funny, and I’m really looking forward to watching her career. Stone has a thoroughly relatable quality about her and that works for her on screen. I found I was able to identify with her character, generally approaching life’s challenges from a logical point of view but every now and then going a little crazy, doing something stupid and falling in love.

Sure, there were moments of contrivance and even a morally questionable moment or two, but overall I liked the film’s understated-ness. I liked that it didn’t talk down to the audience. I liked that it seemed unencumbered by genre and more concerned with good storytelling. I liked that nothing was too tidy, but everything was still satisfying. I like Crazy, Stupid, Love.