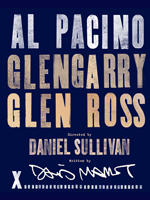 I can't stand David Mamet, and good actors - some of the best in the business - can't make this production of Glengarry Glen Ross palatable. There's no energy or intensity.

The action of the play concerns a groups of salesmen, all of whom are trying to, metaphorically speaking, sell each other on something. What they are literally selling - I have no idea. They all talk about leads but we don't know what leads are. With only a vague understanding of the leads and the fact that said leads help the salesmen, there are no discernible stakes. For their part, the assembled, hard-working actors (Al Pacino, Bobby Cannavale, Richard Schiff, David Harbour, Jeremy Shamos and others) can't sell the show.

Direction-wise, Daniel Sullivan had his work cut out for him. There's no doubt that this troupe can deliver great performances (as is evidenced by their respective bodies of work), but with regard to the staging, how do you make two people sitting and talking interesting? Steve McQueen has an idea, but then again in Hunger we were dealing with a much more compelling script and set up. Sullivan is working with Mamet's verbose script and fails to make the entire first act anything but tedious.

The second act is a little better as there are some palpable stakes and therefore some intrigue, plus it's more than just two people sitting and talking. There are even some funny moments, but that seems mostly due to the great cast and less to do with Mamet's script.

Pacino's Shelly is the most outwardly desperate characters of the lot, though all of them are pretty pathetic. Cannavale's Ricky Roma is an up-an-comer with a zeal for winning; Cannavale (The Motherfucker with the Hat, TV's Boardwalk Empire) plays him to greasy perfection. Schiff, whom you know as Toby Ziegler from The West Wing,  and Shamos (Clybourne Park) are both impressive as mostly quiet but trying men. (Although, Schiff appeared to be losing his voice when I saw the show, about a week in to previews.) If it wasn't for this great cast, and in particular Pacino's box office prowess, not only would I never have seen this (when watching the movie years ago, having rented it from Blockbuster, I turned it off in the middle because I just couldn't take Mamet's bloated writing), but it wouldn't even be running.

Sure, at the end of the day, this is about business men behaving unethically, of which we see plenty today. But this dated play doesn't really comment on the lack of ethics in today's business world and it's not nearly good enough to be decent escapism.

It's a great cast and if you've never seen Pacino or Cannavale on stage, this might be worth the high ticket price. (Although Cannavle is set to appear on stage in The Big Knife this spring, courtesy of Roundabout. Tickets prices will surely be more affordable, especially for HipTix members.) But if you're looking for a good return on investment, don't buy what the folks at Glengarry Glen Ross are selling.
Al Pacino Bobby Cannavale David Mamet Glengarry Glen Ross Richard Schiff the west wing