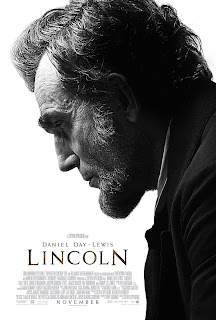 Sometimes, it’s good to see the sausages get made. When we’re in a state of political gridlock, it is particularly important to see what can be done when people work together for the good of the nation - whether or not the nation is ready for it.

(For the uninitiated, in the The West Wing season one episode “Five Votes Down,” Leo, the chief of staff, says to his staff who are advocating to let the public in on the process of passing a bill, “There are two things in the world you never want to let people see how you make ‘em: laws and sausages.”)

And in Steven Spielberg’s Lincoln, we have, essentially, a look inside the sausage factory. (Or, more accurately, the process of getting a Constitutional amendment passed by Congress, and, in particular, the House of Representatives.) Smartly written (with a surprising amount of humor) for the screen by accomplished Pulitzer Prize- and Tony Award-winning scribe Tony Kushner, Lincoln is adapted from presidential historian and author Doris Kearns Goodwin’s Team of Rivals, which looks at how President Lincoln built coalitions and worked with not just the members of his party but also Democrats to pass the 13th amendment, ending slavery (just days before the end of the Civil War, mind you).

(A side note: though the source material for Lincoln is called Team of Rivals, Spielberg and Kushner’s ending dulls the power of Goodwin’s title by including gratuitous and slightly exploitative moments surrounding the assassination. It’s not a terrible, unexpected or even unreasonable ending, just a less powerful one than what could have been.)

The most interesting thing about Lincoln is the way is lays out the criteria for a great leader, which is what we want the person occupying the White House to be. Toward the beginning of the film, President Lincoln is with his advisors and explaining the need for the amendment. He goes into detail about the effects of the Emancipation Proclamation, inclusive of its limits, and methodically plots out what needs to be done, making his case for the 13th amendment. It is here that we’re reminded that President Lincoln is a lawyer; moreover, it is here we are reminded that presidents face impossibly complex issues and so we must demand the leader of the free world be a great, critical thinker, not someone who can simply give you ten-word answers and platitudes.

Though it’s a little slow-moving and even melodramatic at times, overall Lincoln is a well-made film with a cavalcade of talent.

Showing up in supporting and featured roles are tons of theatre folks, including Stephen Spinella (Kushner’s The Intelligent Homosexual’s Guide to Capitalism and Socialism with a Key to the Scriptures), Julie White (The Understudy), Dane DeHaan (The Aliens), Elizabeth Marvel and Lee Pace (The Normal Heart). But theatre folks aren’t having all the fun. The film also includes memorable performances from John Hawkes (Martha Marcy May Marlene), Michael Stuhlbarg (Boardwalk Empire, Hugo) Jackie Earle Healy (Little Children), Hal Holbrook and a nearly Falstaffian James Spader.

David Strathairn (The Heiress), Sally Field and Joseph Gordon-Levitt (The Dark Knight Rises, 50/50) are reliably good in pivotal roles (Strathairn is Secretary of State Seward; Field is Mary Todd Lincoln; and Gordon-Levitt is the Lincolns’ eldest son, Robert), but the film belongs to Tommy Lee Jones as Congressman Stevens and Daniel Day-Lewis as President Lincoln. Both men give praise-worthy, layered performances that will be remembered long after Lincoln leaves the cineplexes.

This peek into American history - a crucial moment in history - is not only engaging but demonstrative. It shows what greatness can happen when we forget about elections and politicking and instead focus on governing.