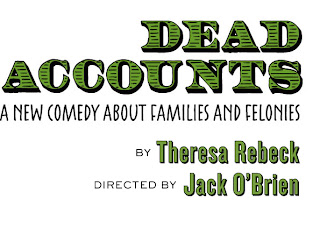 At rise, the big-shot New York-dwelling Jack returns home to Cincinnati. He pontificates about the virtues of the Midwest, disparaging New York with a zeal that is tinged with wistfulness. Though he decries the expensive, unnatural pleasures of New York City (Manhattan, really; he doesn't deign to go to Brooklyn), it seems like he still loves it and more than anything else, he's trying to convince himself that running away from his problems is the right thing to do.

Meanwhile, his put-upon sister (a fine but shrill Katie Holmes) and his well-intentioned but overbearing Midwest mother (a spot-on Jayne Houdyshell (Follies)) try to piece together what's brought the prodigal son back home... and where his new-found fortune comes from. His old friend Phil (Josh Hamilton) lets slip a detail and when Jack's wife Jenny (a natural Judy Greer (Arrested Development, The Descendants)) arrives, the other shoe drops.

Act two brings the reckoning but not a resolution. The ending (which has likely been tinkered with since I saw this early in previews) suggests something—maybe hope —but it's not quite clear. It may have been more satisfying to go without the artsy ending and leave the more grounded yet ambiguous moments preceding it to be the final ones.

That gripe not withstanding, the morality play is all about three things: (1) Theresa Rebeck's (Seminar) sharp, biting and well-observed writing; (2) director Jack O'Brien's careful pacing; and (3) Norbert Leo Butz's (Catch Me if You Can, How I Learned to Drive) unmatched skill as a truly gifted and consummate actor.

Ah, Norbie. He is absolutely hilarious in Dead Accounts. He brings to Jack a manic energy - just going and going and going, plowing over anything (especially food) and anyone in his path. It's such a hammy but certainly complex role (wait for his explosive and touching moments in act two), and this virtuosic, two-time Tony Award-winner more than rises to the occasion.

Dead Accounts is a good, modern family dramedy that fully delves into both the drama and comedy inherent in familial goings on. Theresa Rebeck once again proves herself a strong voice in our era and Norbert Leo Butz cements himself as the leader of his peers.