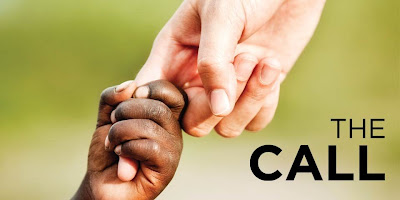 The Call, the new play by Tanya Barfield, is a perfect example of why I love off-Broadway theatre, and, in particular, subscribing to a playwright’s theatre like Playwrights Horizons. You never know when you’re going to stumble on a gem that keeps you thinking days after the performance is finished.

I knew little about the plot of The Call (directed by Leigh Silverman); I knew it had to do with adoption, but that’s about it. And boiled down for simplicity, that’s an accurate description of the overarching plot, but in reality it’s much richer.

Annie and Peter (Kerry Butler (Catch Me if You Can, The BestMan) and Kelly AuCoin) are a white couple living in an unspecified metropolitan area. They are intelligent and sufficiently successful in their respective careers. After having trouble getting pregnant and then going through more than one miscarriage, they decide to adopt. Their friends, Rebecca (Eisa Davis) and Drea (Crystal A. Dickinson (Clybourne Park)), a black lesbian couple, are thrilled. And when Annie and Peter decide they are going to adopt an African baby, Rebecca, who is already fantasizing about styling the child’s hair, spills the beans to Annie and Peter’s new neighbor, an African man named Alemu (Russell G. Jones), much to the chagrin of Annie.

And that’s the crux of the piece: letting (or not letting) the public into your extremely personal decision. Deciding whether or not you want children in the first place is a private matter. Struggling to conceive is private. Deciding to adopt—and what age child you want and from where—is private. These decisions are rife with complicated emotions.

For example, at one point, Annie says that she wants to be the child’s only mother. She bristles at the thought of her child being able to picture someone else as “mommy.” The process of adopting makes everyone in the play (and everyone in attendance) think about the difference between parenting an adopted child and a biological one. It makes you think about the moral implications of different kinds of adoption. Is it selfish to want to adopt an infant, as Annie and Peter do, rather than a toddler or child?

Inarguably, these are entirely personal and private decisions. Yet, in The Call, Barfield explores the way the public can creep into your decision making process. When Annie questions whether or not she’s willing to adopt a child that is older than she and Peter had “asked” for, Alemu starts telling her about the conditions in Africa – what it’s like on the ground.

I became enraged at this. You can’t guilt someone into making such a huge, life-altering choice. As Annie says, “We weren’t asking to solve the world’s problems. We were asking to have a baby.” But maybe there’s no way to keep the outside voices of the madding crowd from seeping in. Is that right, though? How much can you consider everyone else’s feelings when making a personal and intimate decision?

I struggled with these questions throughout the play, and I continue to struggle with them now, days later, as I reflect on the well-crafted play. Barfield is, I learned in a post-show discussion, an adoptive parent of two, and her experience no doubt colored this bracing new play. (It's telling to note that when asked about her personal adoption experience, Barfield chose to keep the details private.) Bravo to Barfield for sensitively exploring subject matter that is still—even with the way we over-share on social networking sites—taboo.

For more information and to purchase tickets, visit playwrightshorizons.com.
catch me if you can drama Kerry Butler off-Broadway play