I’m not exactly sure what I think of The Big Knife, the Clifford Odets play that opened at Roundabout’s American Airlines Theatre last night. It’s interesting and boasts some stand out elements, but it’s not gripping. It’s not ferociously engaging the way this tale of Hollywood intrigue ought to be.

Set in 1948, the play focuses on Charlie Castle (Bobby Cannavale), an actor who came to Hollywood (under the studio contract system, mind you) and became a movie star. His wife, Marion (Marin Ireland), is estranged but his agent, Nat (Chip Zien), and his assistant/friend, Buddy (Joey Slotnick), are never far away. Neither is studio head Marcus Hoff (Richard Kind) and his right-hand man, Smiley Coy (Reg Rogers).

At rise, Charlie must decide whether or not to sign a new, 14-year contract with Hoff’s studio. Marion, with whom Charlie wants to reconcile, despite his wandering eye, is dead-set against it. Complicating matters is a tragic secret from Charlie’s past that comes back to haunt him, compliments of the young Dixie Evans (Rachel Brosnahan), who, despite having been given hush money, is starting to talk.

It seems exciting and lurid, doesn’t it? Just the kind of thing to grip our attention. It’s like some super sensationalized, ripped-from-the-tabloids tale that, when turned into a movie of the week, would fit happily on Bravo. Or, with Odets’s loftier writing, maybe one of the premium cable channels. But it isn’t.

Directed by Doug Hughes (TheWhipping Man), the play drags here and there, and entire character’s storylines could easily be cut and nothing would be missed. To its credit, act three is pulpier and more aggressive, but the ending is predictable and too easy, much like in the other Odets drama revived this season, Golden Boy. (The play is three acts, with an intermission between acts two and three.)

What keep the play interesting are stellar designs and performances. John Lee Beatty’s scenic design (the play is set in Charlie’s “playroom,” as it’s called in the program) is detailed and stylized. Catherine Zuber’s costumes are gorgeous and sumptuous. (I basically wanted to wear everything the women were wearing, and I quite enjoyed looking at Cannavale in Zuber’s sleek, clean designs.)

As the long-suffering wife who finds herself married to someone she no longer knows, Marin Ireland (Homeland, Maple and Vine) absolutely commands the stage. Richard Kind (Mad About You) oozes with the kind of disingenuous charm and sense of entitlement you think of when you think of studio execs. 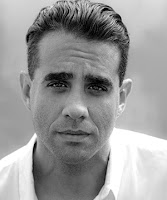 And Bobby Cannavale (Mother…with the Hat, Glengarry Glen Ross) is transfixing in a layered performance. His Charlie is a big, solid man whose physical prowess belies insecurities and vulnerabilities. Charlie is a powerful man on screen and so he tries to project that at home. He’s a scared man who’s trying to stand up for himself, struggling to fight.

Flaws and all, the melodramatic The Big Knife is an interesting look at a particular era in Hollywood and the players who lived it. Moreover, despite being a look back and though the specifics may have changed, the themes—the true cost of fame and the power struggles that abound—are still relevant today. I just wish we could have gotten around to those themes a little quicker.
Bobby Cannavale Broadway play