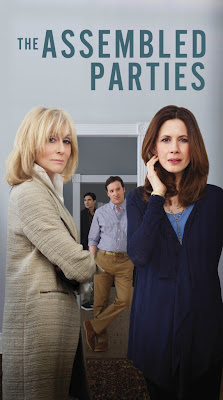 I think I’m getting play fatigue. I have the privilege of seeing dozens of plays on a regular basis and so, I’m finding, the occasions on which I’m truly and thoroughly impressed by a play are becoming fewer and farther between. (Although, I did love the recently-opened The Call at Playwrights Horizons.) Richard Greenberg’s new family dramedy, The Assembled Parties, is emblematic of this fatigue. It isn’t bad, and there are some good elements, but just wasn’t spectacular.

More of a character study than a plot-driven play, the titular assembled parties are members or friends of the Bascov family, a seemingly well-to-do Jewish family who live in a 14-room apartment on Central Park West. (Despite the presumed grandness of a 14-room apartment, Santo Loquasto’s scenic design is disappointingly generic.) We look in on these parties when they gather for Christmas dinner in 1980 (act one) and 2000 (act two).

At rise, Julie Bascov (Jessica Hecht) is chatting with Jeff (Jeremy Shamos), her son, Scotty (Jake Silberman)’s friend who is joining the family for dinner. Julie’s husband Ben (Jonathan Walker) enters the conversation and starts pumping Jeff for details about Scotty. (Jeff and Scotty are about 23 in act one.) Ben’s sister, brother-in-law and niece arrive (Faye (Judith Light), Mort (Mark Blum) and Shelley (Lauren Blumenfeld)) and the family dynamic is further explored. (Much as the characters get lost amid the 14 rooms, I was getting lost early on in the play, trying to sort out the relationships. I caught on quickly enough but it made the first ten minutes a little difficult to follow.) It is all quite interesting and funny, and neatly sets the stage for the revelations, reversals and renewals in act two.

Directed by Lynne Meadow, it’s a fascinating look at one family, how they grow and shrink, how the relationships change and, most poignantly, the secrets they keep in order to keep each other happy. I was keenly aware of the family dynamics; for example, the way, in act one, everyone seems disconnected from one another. As Jeff—the sole outsider—notes, “they all talk like they’re in a play,” talking at each other in carefully crafted sentences. The only time they seem to be honest is when they’re hurting each other. But in act two, after 20 years have passed and certain characters have passed on, there are traces of artifice but also a palpable warmth. There is a tenderness between sisters-in-law Julie and Faye where before there was jealous chiding, for example.

Fascinating as it was, the ending was weak and as I walked out I wondered, “What’s the point”? The subject being explored is as old as Thespis and there’s nothing new being said about it. Families are difficult and time changes things. OK, so, new? What is playwright Greenberg trying to add to the discussion? The fact that that question is left unanswered doesn’t make The Assembled Parties bad, it just makes me unenthused.

I did quite enjoy, however, Jeremy Shamos’s performance. All the actors do good work—it’s a hoot to watch and hear Judith Light (Other Desert Cities, Lombardi) bandy about Yiddish-isms, and Jessica Hecht is luminous as feisty Julie, circa 1980, and wistful, romantic Julie, circa 2000—but it’s Shamos who stands out. As was evident in his performance in Clybourne Park (for which he received a Tony nomination), Shamos is an expert as portraying the uncomfortable-but-trying everyman. He bumbles his way through that first dinner in 1980, quite aware that he’s an interloper and trying not to put his foot too deep in his mouth. He displays a distinguished confidence in 2000, as he’s cemented his position in his adopted family. His character undergoes the most distinct change, and it’s a delight to watch the masterful Shamos (Glengarry Glen Ross, We Live Here) bring to life such dynamism.

And so while I enjoyed elements of the production and found myself engaged in the play throughout, I'm just too tired to become enthusiastic about assembling for this party.
Broadway comedy drama Jeremy Shamos Jessica Hecht Judith Light